Antoine Davis was born on October 3, 1998, in Bloomington, Indiana. He is the son of Mike Davis and his wife, Tamilya Floyd. Antoine has a sister named Lateesha and a brother Mike Davis Jr. His father is an American basketball coach. He has been the head men's basketball coach at the University of Detroit Mercy since 2018. Davis graduated from Homeschool Christian Youth High School and enrolled at the University of Detriot Mercy. Antoine stands six feet and one inch tall and weighs 73 kg.

Antoine started practicing basketball along with his father and his siblings in their backyard. His father remains his biggest source of inspiration. Davis started playing for the Houston Hoops on the Amateur Athletic Union Circuit and averaged 23 points per game as a senior for HCYA. Many NCAA Division I universities did not consider him among top prospects and were not offered scholarship programs. 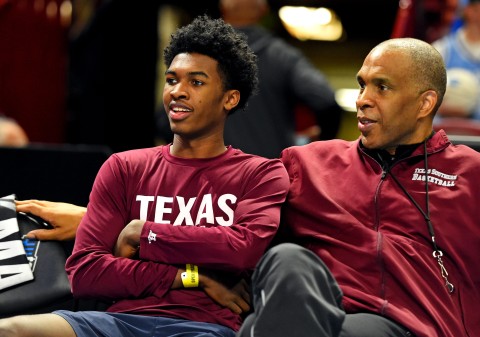 Antoine plays in the NCAA under his father Mike Davis SOURCE: Mid-major Madness

Antoine committed to play for the University of Houston but later moved to the University of Detroit Mercy after his father got recruited as head coach. In his debut match, Davis scored 32 points and made a good impact in the league. He became the first freshman to be named to the First Team All-Horizon League team and also finished the season with 132 three-pointers, surpassing the freshman record of 122 set by Stephen Curry.

Davis ranked third in the leading scorer in NCAA Division I with 26.1 points, 3.1 rebounds, and 3.6 assists per game. In his sophomore year, Antoine was named to the First Team All-Horizon League, averaging 24.3 points per game while also averaged 4.5 assists per game. Antoine passed the 2,000 career point mark in his junior year and finished the season averaging 24 points per game. Davis will finish his undergraduate and list his name for the 2022 NBA draft.

Antoine is believed to be single as of 2021. He has successfully kept his personal life away from the media. Davis is very early in his career and must focus on his career rather than spending time with people. However, Antoine could secretly be dating someone and waiting for the right time to open about his relationship status.

Know About Antoine Davis's Earnings, Net Worth and Contract

Antoine Davis is yet to start his economical career. He is currently playing in the NCAA Division I. As per NCAA rules, Universities offer students with scholarships to help them cover most of their expenses. Davis is among the top-ranked rising basketball player. The average salary of a rookie NBA player is more than $2 Million.