Colbey Ross was born on October 22, 1998, in Aurora, Colorado. He is among the three children born to Mary Ross and her husband, Corey Ross. He has two siblings, Elijah And Jadyn. His brother Elijah played basketball for Eaglecrest High School and won a state championship in 2013. Ross graduated from Eaglecrest High School and enrolled at Pepperdine University. Talking about his physical appearance, Colby stands six feet and one inch tall and weighs 84 kg.

Colbey started playing basketball along with his elder brother in his backward. He was part of his High School basketball team and averaged 18.6 points, 4.6 rebounds, and 3.4 assists per game, leading to the Class 5A state title game in his junior year. The same year, Ross was selected to play in the state's High School All-Star Game. He was named the Colorado Gatorade Player of the year and was the only player from junior year to play in the state title game.

Colbey averaged 18.4 points, 5.0 assists, 4.9 rebounds, and 2.4 steals per game in his senior year. He led the school to win the Class 5A state championship and earn the most valuable state tournament play. Ross won several other awards and was offered numerous scholarships from universities. He chose to play for Pepperdine and rejected other offers.

Ross scored a freshman season-high 25 points and added five rebounds and four assists in the losing game to UC Santa Barbara. As a freshman, Colbey averaged 14 points, 5.6 assists, and three rebounds per game. He set the school freshman's record for total assists, with 179. Ross was named to the West Coast Conference All-Freshman Team and All-WCC honorable mention selection. 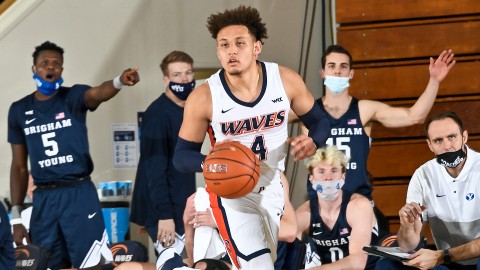 Colbey played in the NCAA for Pepperdine University SOURCE: Pepperdine.

In his sophomore year, Ross earned WCC All-Tournament Team honors after leading Pepperdine to the semifinals of the 2019 WCC Tournament. Colbey averaged 19.4 points per game. He averaged 20.5 points, a WCC-high 7.2 assists, and 4.7 rebounds per game in his junior year. After completing his undergraduate, Colbey enrolled at the 2020 NBA draft but was undrafted.

Colbey is an active social media user. He is believed to be single as of 2021. Ross has not shared a word about his love life with the public. Colbey is very early in his career and must focus on his career rather than spending time with people.

Colbey is going to start his professional career. The average salary of a basketball player is more than $2 Million. However, He was not drafted in the 2021 NBA draft and must be looking forward to joining one of the leagues in Europe.