Andre Drummond is an American professional basketball player who plays in the National Basketball Association (NBA). Drummond currently plays for the  Brooklyn Nets as their Center. The 2-time NBA All-Star was picked 9th overall in the 2012 NBA Draft.

Playing as a Center, Drummond reportedly earns around $814,314 as his annual salary from Brooklyn Nets. Further, Drummond has an estimated net worth of over $60 million.

Andre was in a serious relationship with American actress Jennette McCurdy in 2013 and later with American model Candice Brooks until 2015. Currently, he is single.

Andre Drummond's Net Worth in 2022

Andre Jamal Drummond has an estimated net worth of over $60 million in 2022.

Kept aside Andre Jamal Drummond financial earnings, his personal assets includes home and cars. He is among the wealthiest players in NBA history.

Further, the NBA Player Andre Jamal Drummond earns a good amount of money from various sponsorships. He reportedly earns over $1 million from sponsors like Panini, Nike.

Who is Andre Drummond's Girlfriend?

Andre Drummond was in a romantic relationship with American actress Jennette McCurdy but later they got separated in 2013. Their affair didn't last long. 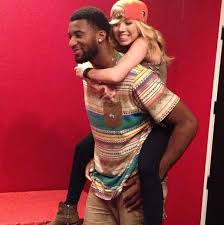 Andre started dating American model Candice Brooks after he broke up with Jennette and this affair also didn't last long.

Details regarding Andre's current probable wife/girlfriend are not disclosed yet.

The Famous NBA star Drummond is 6 feet 11 inches tall in height and weighs around 127 kg. Andre Jamal Drummond is not only a world-class athlete but also has a very attractive individual with outstanding Bio.

Other than being a famous NBA Center, Andre Jamal Drummond is pretty famous in social media with a huge number of followers. He has millions of followers on his Twitter and Instagram Account.

Andre Jamal Drummond was born on August 10, 1993, in Mount Vernon, New York to mother Christine Cameron. He holds American nationality and belongs to the African ethnic group. Further, his star sign is Leo. He spent his childhood along with his sister Ariana.

Andre attended Woodrow Wilson Middle School and later joined Capital Preparatory Magnet School, Hartford, Connecticut along with his sister. He averaged 12.7 points and 11.9 rebounds and 6.5 blocks as a freshman and averaged 20.2 points, 16.6 rebounds, 7.2 blocks and 4.5 steals per game as a sophomore.

After studying for two years at Capital, he joined St. Thomas More, Oakdale Connecticut and led the team to national prep championship in 2011. ESPN and NBADraft.net ranked him as the # 1 player in the 2011 class, while Rivals.com and Scout.com ranked # 2 player.

Andre Drummond attended the University of Connecticut in 2011 and played 34 games as a freshman scoring 10.0 points and grabbed 7.6 rebounds. The college career of Drummond ended in the first round of the NCAA Tournament, with the ninth seed Huskies falling to the Iowa State of eight seeds.

Within 26 minutes, the freshman center scored two points. One month later, Drummond announced its decision to accept the NBA draft for 2012

Andre Drummond has played for his country's national team as well as for the Detroit Pistons of the NBA. Playing career of Andre in detail are listed below:

Andre was selected in the 9th overall pick in the 2012 NBA Draft by Detroit Pistons. He was named 2012-13 NBA All-Rookie Second Team after averaging 7.9 points, 7.6 rebounds, 1.0 steal, and 1.6 blocks in 20.7 minutes per game in his rookie season. Andre was also titled MVP of the NBA Rising Stars Challenge. Andre scored his then career-high 32 points against Miami.

Drummond was the first player scoring 3 consecutive double-doubles to start the season of Detroit since Ben Wallace(2004-05) and later named the Eastern Conference Player of The Year. Besides, he is the first player winning this award since Rodney Stuckey of Detroit.

Since Dennis Rodman in 1990–91, he became the first Piston player with at least 30 points and 20 rebounds. During 2015-16 season, he played against many clubs like San Antonio Spurs, Milwaukee Bucks, and Cleveland Cavaliers. 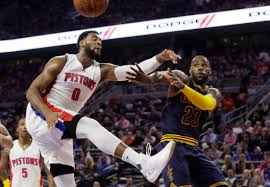 CAPTION: Andre Drummond in the court SOURCE: The Denver Post

Andre reached 4,000 rebounds in his career. He was the second youngest player to reach the milestone at 23 years and 101 days, trailing only Dwight Howard( 22 years, 129 days).In the first 13 matches of two different seasons, Drummond became the first player to grab at least 200 rebounds since Dennis Rodman did it three times for three different teams in the 1990s.

He also had six assists and four steals and became the first player with many points, rebounds, assists, and steals since Charles Barkley in January 1990. In addition, he played against Boston Celtics, Utah Jazz, Atlanta Hawks, Minnesota Timberwolves, Miami Heats, Brooklyn Nets, and Washington Wizards.7.6.

On 29 March, he scored 24 points and 23 rebounds in a 103-92 win over the Wizards in Washington. It was his 20th/20th career game, the most important NBA player since joining the league in 2012. Andre ended the regular season with 16 rebounds per game and became the first player since Rodman in 1997 to average 16 rebounds per game in one season and only the second player in the last 40 years.

Andre Drummond was a member of the US national team, who won the 2014 FIBA Basketball World Cup gold medal. During the tournament period, he averaged 3.0 points and 2.5 rebounds in 8 games.