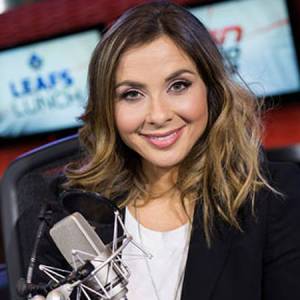 Andi Petrillo is a Canadian sports broadcaster who became the first-ever female member to serve on a full-time basis with the Hockey Night in CBS network. Further, she was honored with the  Woman of Influence Award in 2012. Additionally, Petrillo becomes the first woman to be honored in a sports program or series by the Academy of Canadian Cinema & Television.

The resident of Canada, Andi Petrillo, reportedly earns around in the range of $66,881-$72,835, as her yearly salary from the network, and as of 2018, she reportedly has an estimated net worth of over five-digit figure. she is currently married to her husband Jon Conway.

Andi Petrillo was born on April 9, 1980, in Toronto, Ontario, Canada. she holds a Canadian nationality and belongs to White ethnic group. Further, the details about her early childhood, parents, and siblings are not surfaced in the media yet.

Andi Petrillo Net worth and Salary

The Canadian sportscaster/anchor Andi Petrillo has an estimated net worth of five-digit figure. Being more specific, the reporter receives an annual salary in the range of $66,881-$72,835 from her successful reporting career with CBC Network. Further, CBC reporter receives an added sum of money from her radio and TV guest appearances as a sports pundit too.

Further, some of the highest earners of the CBC network are Jim Hughson, Bill Clement and many more.

In 2006, Petrillo joined Leafs TV (owned by Maple Leaf Sports and Entertainment (MLSE)) and served as a reporter for the broadcast of games featuring the Toronto Maple Leafs of the National Hockey League and their affiliate Toronto Marlies of the American Hockey League.

With ESPN, she had the opportunity to do some freelance work like sideline reporting for the National Lacrosse League Championship game in 2008.

The role of Petrillo expanded under MLSE and she started working on other TV stations: NBA TV Canada and GOL TV Canada as host and reporter of the Toronto Raptors and Toronto FC games.

CBC Sports launched a new show " Road to the Olympic Games" on 24 October 2015 where Andi worked along with veteran sportscaster Scott Russell.

She anchored CBC's 2014 Winter Olympic coverage in Sochi Russia and the 2014 FIFA World Cup. Petrillo then joined NHL Tonight, the flagship show for the 2014- 15 NHL season on the NHL Network in Canada and the United States.

On 18 February 2016, Petrillo was announced to join TSN as the new radio voice for Leafs Lunch on TSN 1050, finally becoming the first woman in Canada to have her own daily radio talk show.

As per her wiki, Petrillo is a married woman and she is happily married to her husband Jon Conway. Her marriage is one of the life-changing moments in which the lady has the opportunity to expand her career in the future. Further, Andi has managed to balance both of her personal life and career with the support of her husband.

When you're supposed to be posing like a pro, but the photographer starts playing your jam...#DanceTime #PhotoShoot #CBCSports #CBC #Olympics #pyeongchang2018

In addition, Petrillo is also one of the hottest, beautiful and bold journalists with a perfect height of 5 feet and 9 inches.