Amanda Davies is a famous British sports presenter currently working for CNN International. Beside CNN International, she has also worked for other popular networks such as BBC and Sky Sports.

The resident of West London, Amanda Davies, reportedly earns around $135k as her yearly salary from the network, and as of 2018, she reportedly has an estimated net worth of over $1 million. She is currently living with her daughter but the information about her daughter’s father is a secret.

Amanda Davies was born on 24 March 1980 in Manchester, England to David Davies who himself was also a sports journalist and sports administrator. She holds British nationality and belongs to the Caucasian ethnic group.

Amanda Davies was educated at Haberdashers’ Aske’s School for Girls before the family moved to the Midlands, she then joined King Edward VI High School for Girls in Edgbaston, Birmingham and after High school joined St Edmund Hall, Oxford and acquired her Bachelor's degree in Geography.

Davies joined Sky Sports during her University days in 2001 as a runner. She presented different live sporting events including big events such as Cricket World Cup and US Open. She worked in a different role in Sky Sports including assistant news editor, on-the-road producer, and presenter.

Her most major work in Sky Sports includes Germany World Cup 2006 coverage. She also debuted as a reporter on Sky Sports News with Ian Payne in 2005.

Further, she was a regular presenter of the BBC Sport’s Your News which required her to travel around the country to a different location every week and tell stories of viewers. 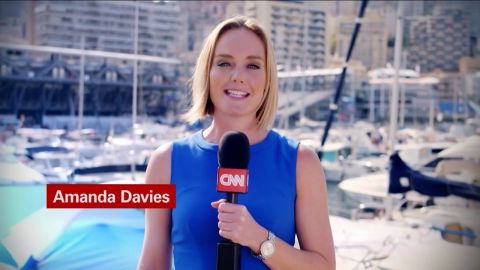 She has covered many major International sports events for CNN such as Olympics in London 2012, Sochi 2014 and Rio 2016, Football world cup of 2014 in Brazil, and European Championships of 2016 in France. She has also covered Lance Armstrong drugs scandal, FIFA scandal, Russian doping crisis and death of Reeva Steenkamp.

Amanda Davies Net worth and Salary

The CNN television journalist Amanda Davies has an estimated net worth of $ 1 million. As of 2018, the reporter receives an annual salary of $ 135k from her successful reporting career with CNN International. She lives a very private life and so information regarding her other assets, house, cars etc are not available.

Amanda has not made her relationship public. It is known to everyone that she has a daughter named Molly but apart from that there is no information regarding her married life, her current affair and also not even the name of her daughter’s father has been brought to light.

Molly started doing charities and helping charities organization when her daughter had a premature birth. She had become the patron at the Queen Charlotte’s and Chelsea Hospital’s milk bank where her daughter was born 9 weeks early. She is a supporter of Bliss and is also an Ambassador for Sparks.