The resident of Southern California, Christopher Rose, reportedly earns $500k, as his yearly salary from the network, and as of 2018, he reportedly has an estimated net worth of over $3 million. He is currently married to his longtime girlfriend Michele and has children named Brady, and Josh with her.

Christopher Rose was born on January 27, 1971. He holds an American nationality and belongs to White ethnic group. Further, Christopher Rose grew up with his two brothers named Bob and Pete.

Christopher Rose after graduating from University School joined the Miami University in Oxford and acquired his degree Bachelor's degree. During his college life, he was a station manager at the student-run radio station named WMSR.

Rose is a popular program host for The Best Damn Sports Show Period which used to be telecast on Fox Sports Net. He also hosted the poker show named Million Dollar Challenge broadcasted by Fox.

Rose became a play-by-play commentator for Fox’s coverage of the NFL in 2007. Also, during 2006, he did Gamebreaks for the NFL.

In 2007, he was ranked 7th play-by-play announcer for Fox’s coverage of the NFL but in 2008 his rank fell down to 8th position but again in 2009 he rose back to the 7th position. He also did commentary for Golden Boy Boxing in 2012 which was aired on Fuel TV.

Rose did host the Fox Saturday Baseball pre-game show in 2009 and also presented the World Series trophies from 2009 to 2011. He was also a Fox Network field reporting for MLB. Rose also hosted Big Shots: Titans at the Tee and hosted the inaugural season of The Cheap Seats during 2010 Major League Baseball season.

Rose started working for MLB Network in April 2010 and a year later he began co-hosting a show named Intentional Talk with Kevin Miller and it is one of the most viewed shows on MLB Network.

On August 28, 2012, NFL Network announced that Rose was added to their team for shows like NFL GameDay Highlights, NFL GameDay Final and NFL Total Access. 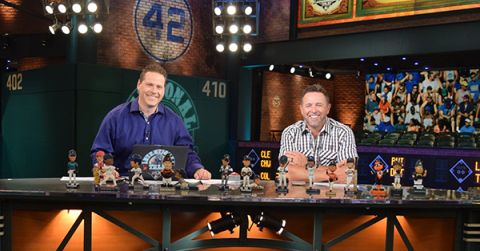 Rose also works as a play-by-play announcer for robot combat series BattleBots which aired on ABC but now he has moved to Discovery Channel.

Chris Rose Net worth and Salary

The American sportscaster/anchor Christopher Rose has an estimated net worth of $3 million. As of 2018, the reporter receives an annual salary of 500k from his successful reporting career with MLB Network and NFL Network. Added to that, the reporter receives an added sum of money from his robot combat series named BattleBots which airs on Discovery.

Chris Rose was married to Michele in 1997 but he has not disclosed the information of his marriage till 2016. On 2016, September 6, he twitted about his anniversary and the world knew that he was married.

There was also a rumor about him being a gay but that tweet also put a stop to that rumor. He has two sons named Brady and Josh and with his wife Michele. As of now, the family is living happily together.

To the woman of my dreams: Thank you for saying, “I Do”, 21 years ago today. I love your smile, your passion, your friendship, and being your partner. The journey that’s included 4 houses, 3 cities and 2 kids has been one wild ride. What do you say we keep this thing rolling? There’s no one I would rather share this adventure with than @michele_rose_ Happy anniversary!!

During his career in Fox, Sports people criticized him for being over-friendly because he used words as ‘Jeets’ and ‘friends’ while interviewing the players.