Ronald Eldridge Claiborne is a former American journalist and correspondent who worked for ABC News. He is known for his work in the weekend edition of Good Morning America as “more news reporter”.

Ron Claiborne reportedly earned around 100k as his yearly salary from the network when he was working for it. He reportedly has an estimated net worth of over $1 million. He is currently single and unmarried.

Ron Claiborne was born on August 20, 1953, in San Francisco, California to Earl Claiborne. He holds an American nationality and belongs to African-American ethnic group. Further, Ron Claiborne grew up in Oakland with his elder brother Keith.

” I was in San Francisco but lived there only two days, which is when my mother and father brought me home to Oakland.”

Ron Claiborne worked for WNYW-Tv in New York City as general assignment correspondent at the beginning of his career. From 1980 to 1982, he also worked as a reporter for the New York Daily News. He then worked in United Press International wire service as a reporter and an editor. 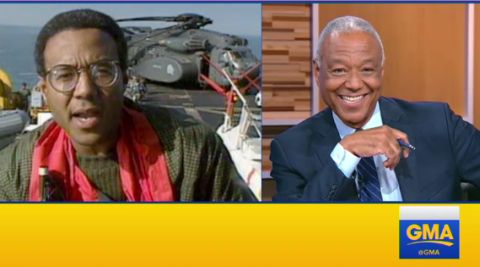 In 1986 Claiborne joined ABC News as a general assignment correspondent and usually reported to World News, Nightline and Good Morning America. During his tenure, he reported on lots of topics such as legalization of gay marriages in Massachusetts; the Persian Gulf war; the scandal of the Boston Church in 2002 etc.

Outside the GMA studio in Times Square, people like to gather, wave and take pictures of us inside. This morning, I turned it around. I waved at & turned the lens on them.

In the year 2000, he was awarded an Emmy for the coverage of Elian Gonzales in Miami during his seizure.

Ron Claiborne Net worth and Salary

The American journalist and correspondent, Ron Claiborne has an estimated net worth of $1 million. Before his retirement, the reporter used to receive an annual salary of $100,000 with ABC News.

Further, he also received an added sum of money by covering other news events and also by reporting the election campaign.

With the earnings from his successful reporting career, he is currently living a comfortable life.

Ron Claiborne is believed to be single at current and has not married to date. He has kept his personal life, relationship, affair and personal history quite low among the people and media.

In September 2011 while he was on the set of Good Morning America during the informal call interactions after the show, he was asked about his personal life, marital status, wife and children by a viewer. In response, Claiborne said that he is unmarried and doesn't have a wife and children.

Claiborne is very active in social media and has 12.6 followers on Twitter and 3,907 followers on Instagram. He likes to listen to music in his spare time and he also loves sports. He is not a very great food fan but he likes Mexican and Indian food and he likes spicy food.