Alex de Minaur is an Australian professional tennis player who is currently at the 18th position in the ATP World Tennis Rankings singles. He has been to the Grand Slams a total of six times. His singles career record stands 100-71 with four titles whereas the doubles entail 16-24 with one title. In partnership, he has been to the six Grand Slams.

De Minaur was born in Sydney, Australia on February 17, 1999. He is the son of an Uruguayan father and a Spaniard mother. He has two brothers and three sisters. He holds dual citizenship: Australian and Spanish. He began playing tennis at age three at the Sydney Private Tennis Academy.

De Minaur turned professional in July 2015 at the Spain F22, where he reached the quarterfinals. He has a 4-20 (16.7%) record against players who were, at the time of the match, ranked in the top 10. He made his Grand Slam debut at the 2017 Australian Open after receiving a wildcard.

At the competition, he managed to last till round two. That year in May, he marked his French Open introduction but lost the opening round to Robin Haase. He faced a similar fate at the 2017 US Open, losing in 1st round to Dominic Thiem. 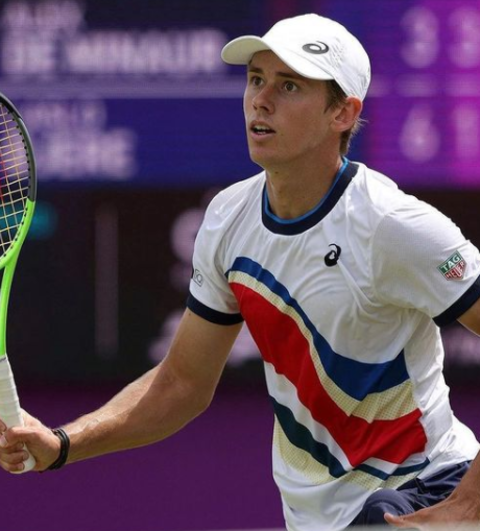 He finished the 2018 year with a singles ranking of 208. In 2018, after reaching his second ATP Tour semifinal, he became the youngest player to play in two consecutive ATP semifinals since Rafael Nadal in 2005. At the 2018 Australian Open, he lost in the first round to Tomas Berdych. That year's French Open saw him losing in the first round to Kyle Edmund. He experienced his best major results to date at Wimbledon, defeating Marco Cecchinato and Pierre Hughes Herbert to reach the third round, where he was upset by Nadal.

At the US Open 2018, he defeated Taro Daniel and Frances Tiafoe before losing to Marin Cilic. He claimed his first career title, 2019 Sydney International defeating Andres Seppi 7-5, 7-6 in the finals. At the Australian Open 2019, he yet again yielded to Nadal in the third round. The year's Wimbledon saw him reaching the third round. His second career trophy was at the ATP Final in Atlanta where he bested Taylor Fritz.

He added a third trophy to his name beating Adrian Mannarino in the final of the Zhuhai Championships. In 2020, he partnered up with Pablo Carreno and defeated Jamie Murray/Neal Skupski to win the Cincinnati Masters. He reached his first Grand Slam quarterfinals at the 2020 US Open where he lost to Dominic Thiem. He got his fourth pro honor, the Antalya Open 2021 after his opponent, Alexander Bublik retired from the final due to a right ankle injury. At the Cinch Championships (June 14, 2021, to June 20, 2021) he defeated Laslo Djere, John Milman, and Marin Cilic before losing to Matteo Berrettini in the semifinals.

So far, the former Sydney International winner has amassed career earnings worth $5,208,327. His biggest takeaway came from him winning three tournaments in 2019; the finals victories at Sydney International, Atlanta Open, and Zhuhai Championship brought him a combined sum of $1,979,782. 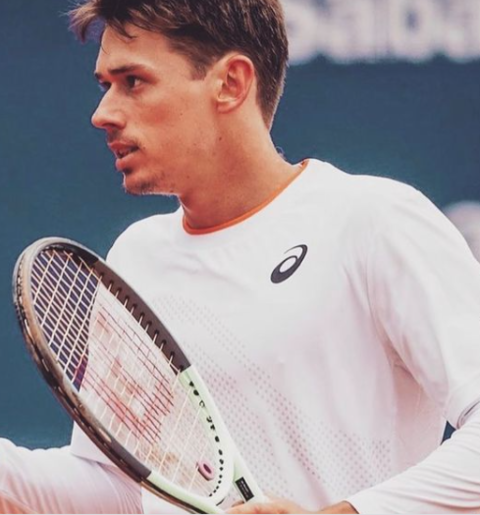 In 2018, he was present in all of the Grand Slam Tournaments including finals at Alicante, Surbiton, Nottingham, Next Generation ATP, Sydney International, and Washington Open. All these feats brought him an amount worth a little over $1,252,000. In 2020, he cashed in about a million-dollar, plus half a hundred grand pulled out through reaching the final of the European Open, winning the Cincinnati Masters, and making it to the first round of the French Open.

Espn reveals De Minaur made around $684,859 going through the first, second, quarter, and semifinals of the Cinch Championships. Owing to the above figures and details, one could assume the 22-year-old net worth lies anywhere between $1 million- $2million. The number might be even higher - considering his sponsorship deals with several brands; some of which include Eniq Wellness, Asics Tennis, and Onitsuka Tigers. 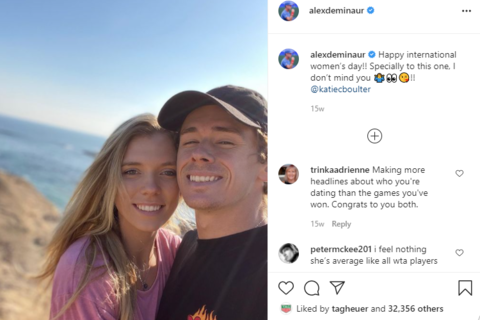 "Guess you're OK too," Boulter replied to her boyfriend's post with some red heart stickers and several other doting emoticons. During 2021, Australian Open, de Minaur enjoyed his straight-sets second-round win writing his partner's initials, "KT" on the camera lens. This was the first time fans had speculated about their relationship. Boulter reached a career-high ranking of world no 82 in 2019 and was a part of Great Britain's Federation Cup Team. Alex de Minaur was born on 1 August 1996, in Woodhouse Eaves, Leicester, England. She has won five singles and four doubles titles on the ITF Women's Circuit. On 18 February 2019, Boulter reached her best singles ranking of world No. 82.  SOURCE: Instagram

Prior to the young tennis star's revelation in March 2021, the pair had been regularly commenting on each other's Instagram doing. Boulter confirmed she had battled chronic fatigue since she was a teenager but later said she "now feel like I've officially conquered it." Allegedly the now bae of de Minaur previously dated American player Jack Sock while the Australian himself was known to have had a fling or two with Anastasia Potapova, a Russian tennis player.

Boulter had suffered a spinal stress fracture in 2019 which sidelined her for the rest of the year. After returning from injury, she entered the Australian Open but was bundled out in the first round of the tournament in straight sets.