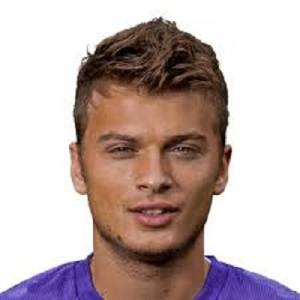 Adem Ljajic is a professional football player who plays as an attacking midfielder for Serbia National Team and Besiktas on loan from Italian professional football club, Torino FC. He has played for top Italian Serie A clubs like ACF Fiorentina, AS Roma and Inter Milan and represented Serbian in their youth levels.

Regarding his personal life, he is possibly single and unmarried. Further, his net worth is approximately $5 million with an annual salary of $2.8 million.

Adem Ljajic’s Net worth and Salary in 2019

Looking at his earnings from football career and endorsement deals with sports brands like Nike, his net worth could be in excess of $5 million.

Adem is also believed to have some cars including Ferrari. He is often seen riding his red $200,000 worth car and has also posted some photos on his Instagram.

Currently 26, he stands at the height of 5 feet 11 inches and weighs around 74 kg. He was previously engaged to girlfriend, Sofia Milosevic. Sofia moved to Milan from Ljubljana, Slovenia, to be with him.

Sofia is a model. They are believed to have been dating each other since 2015 but was rumored to have parted ways in 2016. However, they were later spotted together on the streets of Milan some weeks after.

The couple was also spotted together for the vacation in Belgrade back in 2016.

Adem was once spotted with Zoran Petrovic and was rumored to be dating her.

Adem Ljajic holds a Serbian nationality having a Bosniakian ethnicity. He was born on 29 September 1991 in Novi Pazar Serbia.

He was born to Serbian parents, mother,  Binasa Ljajic and father, Sahmir Ljajic and was interested in playing football since his early days as a child.

After playing for the reserve team of FK Partizan, he joined the main team in 2008 and scored his first goal for the Serbian club against OFK Beograd on 23 November 2008. He was the prominent player for Partizan team and helped the club to win Serbian  SuperLiga and Serbian Cup in 2008/2009.

Adem Ljajic was transferred and signed a five-year contract with the Italian club, Fiorentina for a transfer fee worth €8 million in January 2010.

He made his debut Serie A debut against Cagliari on 31 January 2010 and scored his first goal for Fiorentina against Lazio on 18 September 2010.

Following his impressive performances for Fiorentina, he signed a four contract with fellow Italian Serie A side, AS Roma for a transfer fee of €11 million that could to be rose to €15 million. He made his debut for Roma against Hellas Verona and as well as scoring his first goal in the same match for the team on 1st September 2013.

The Serbian attacking midfielder was transferred from AS Roma to  Inter Milan for 2015 season loan deal in August 2015 worth €1.75 million and scored his first goal for Milan against Napoli on 1 December 2015.

He is currently signed with the Italian club, Torino who signed him with €8.5 million deal in July 2016.

After playing for Serbia in their U-17 and U-19 teams and was called up by the senior team in 2010. He scored his first international goal for Serbia against Azerbaijan in a friendly match on 7 June 2015.

He, alongside Serbian footballers such as Antonio Rukavina, Aleksandar Mitrovic, played for Serbia under captain Aleksandar Kolarov in 2018 FIFA World Cup at Russia.