Apart from playing for several football clubs like  German football club, Borussia Dortmund and has represented Serbia in their youth team.

Rukavina made his debut for the Serbian senior team from 2007.

He was born on 26 January 1984 in Belgrade, Serbia and holds a Serbian nationality. The defender was interested in playing football since his early childhood days.

Antonio Rukavina’s Net worth and Salary

His annual salary is around € 1.6 million with a weekly salary in the range of € 32,000  which he receives from playing for Villarreal CF and has market value worth € 1 million.

Looking at his professional playing career along with his assets, his net worth could be around $ 900,000.

After playing for the junior team of Bezanija, he signed with the senior team to start his professional career in 2002.

He was the part of the team that went on to win Serbian First League 2005/06.

Rukavina then signed a four-year contract deal with Partizan in 2007 and quickly established himself as a regular player as well as becoming the captain of the side in 2007/08 season.

He was transferred to German Bundesliga football club, Borussia Dortmund in 2008 and made his debut against MSV Duisburg on February 2, 2008.

With Borussia Dortmund club, he was the part of the team that went on to win German Cup in 2008.

The Serbian defender was transferred from Dortmund to 1860 Munich for 2009 season was made permanent player by Munich in the summer of 2009.

He later moved to Spanish and signed a three-year contract deal with Real Valladolid in the summer of 2012 and made his debut against Zaragoza on 20 August 2012.

Antonio Rukavina is currently for Spanish professional La Liga club, Villarreal CF whom he signed a two-year contract with the team on  8 July 2014.

After playing for Serbian team at UEFA European U21 Championship in 2007 at the Netherlands., he made his senior debut for Serbian national senior team on 2 June 2007 against Finland during UEFA Euro 2008 qualifiers.

He is expected to feature alongside, fellow defender, Dusko Tosic, and Matija Nastasic at the 2018 FIFA World Cup at Russia for Serbia captained by Aleksandar Kolarov.

The defender has made 45 appearances for Serbia and has yet to score an international goal for Serbia.

He is 33 years old and stands at a height of  5 feet 9 inches tall as well as weighing around 74 kg. He is married to his wife, Dragana Rukavina whom he tied his wedding knots in 2010. 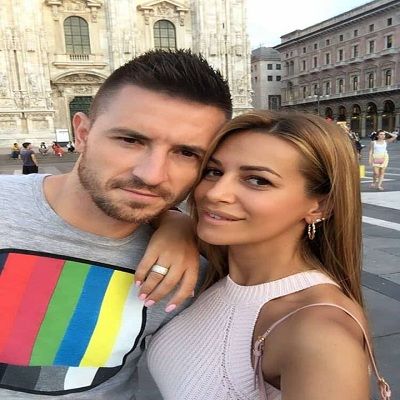 They are blessed with two children, Andreas born in 2010 and Lina  Rukavina born in 2015. His wife, Dragana is a costume designer. The couple currently read in Germany.