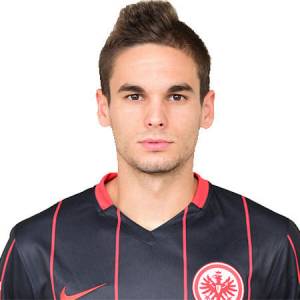 Mijat Gacinovic is an international footballer who currently plays as the midfielder for National Team of Serbia and German sports club, Eintracht Frankfurt.  The 23-years-old footballer started his career with Leotar and also played for Vojvodina.

Mijat Gacinovic was the member of Vojvodina that won Serbian Cup in 2013–14 and was also included in Serbian Superliga Team of the Season that year. LIAN SPORTS is the agent of Mijat Gacinovic.

Mijat Gacinovic was born on February 8, 1995, in Novi Sad, FR Yugoslavia. Regarding his nationality, Gacinovic is Serbian. His father Vladimir was also a football player who played for FK Becej. His mother's name is Zagorka Gacinovic.

Gacinovic's current market value is estimated at €5.00 million as of December 28, 2017. His currently yearly salary is estimated to be $0.85 million from his current club, however, he has n’t disclosed his current net worth.

During his youth career, Mijat Gacinovic played for Leotar and Vojvodina. In 2013, he was promoted to the first team of Vojvodina and made his debut under the manager, Nebojsa Vignjevic on March 19, 2013, replacing Miroslav Vulicevic in a 3-0 victory over Donji Srem.

Mijat Gacinovic scored his first goal in a 3-2 win against Radnicki Nis. He was named as the team captain in 2015 after becoming a league top scorer in the 2014-015 season, netting 11 goals.

In 2011, Mijat Gacinovic made his international debut with the Bosnia and Herzegovina U-17 with whom he played 34 games scoring 1 goal. He was the member of U-19 that won UEFA U-19 Championship in 2013.

On March 24, 2017, Gacinovic earned his first senior cap under the coach, Slavoljub Muslin, replacing Filip Kostic in a 2018 FIFA world cup qualification against Georgia where he scored his debut goal.

Gacinovic scored his second goal on September 2, 2017, against Moldova. He has been capped 6 times for his national team scoring 2 goals.

He is supported by Dusan Tadic, Nemanja Matic, and Adem Ljajic in the international games.

Gacinovic is in a relationship with his girlfriend, Vedrana Bovan. The couple is together for a long time but they haven't revealed any further details about their affair and love life.

The couple is together for more than 5 years and currently live in Frankfurt.

Gacinovic often posts numerous snaps with his girlfriend on Instagram.