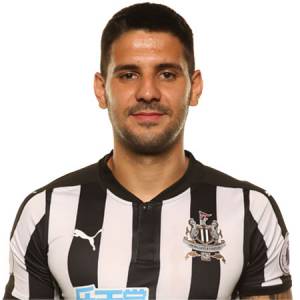 Aleksandar Mitrovic is a professional football player who plays a striker for Serbian National Team and English football club, Fulham FC. Moreover, the hunk previously played for several football teams and represented Serbia in their youth division. He made his international debut for Serbia in 2013 and appeared in 46 games scoring 23 goals in the process.

Mitrovic has a net worth of about $7 million in 2019 and reportedly has an annual salary of $3.2 million.

Aleksandar Mitrovic’s Net worth and Salary

As of 2019, Aleksandar has an estimated net worth over $7 million. Currently, he is signed to Premier League side, Fulham where his weekly salary is assumed $62778 which is around $3.2 million per annum.

With his accumulated fortune, he lives lavishly with his wife and a son.

Currently, 24, he stands at a height of 6 feet 2 inches and weighs around 82 kg. He is married to his wife, Kristina Mitrovic. The couple is blessed with a  son, Luka Mitrovic and a daughter.

His son Luca was born in March 2016 and the couple had their second child, a daughter in November 2017.

The family of Mitrovic looks blessed and happy with life.

He was born to mother, Natasha Mitrovic, and father, Ivica Mitrovic on 16 September 1994 in Smederevo, Serbia.

Mitrovic started to play football since he was a very small and joined the local youth club of Partizan in 2005.

After playing for the youth team of Partizan club, he played at the senior team of Teleoptik in 2011 and later on rejoined his former club, Partizan.

He signed a four-year contract with the club on 27 June 2012 and made his debut as well as scored his first goal against Valletta during Champions League Qualifiers.

Mitrovic was an influential player in Partizan team and won the Serbian Superliga in 2012/13. He signed with Belgian professional club, Anderlecht for transfer fee around  €5 million in 2013 and made his debut against Zulte Waregem on 1 September 2011.

He was highly successful with the Belgian club as his side won Belgian Pro League and Super Cup in 2014.

Mitrovic then signed a five year deal with English Premier League club Newcastle United in 2015 worth £13 million and made his debut against  Southampton on 9 August 2015.

He scored his first goal for the Newcastle United against Manchester City on 3 October 2015.

The Serbian striker created history when he becomes the sixth player to score a goal, assisting a goal and also being sent off in the same match in the Premier League history.

Very hard match today, but a good mentality and fight from the team ... I'm happy for goals and the fans were amazing as always ...#nufc

He won the EFL Championship in 2016/17 as a part of Newcastle United team.

Mitrovic is currently playing for Fulham whom he joined as a loan from Newcastle United in 2018 and made his debut for the club against Nottingham Forest on 3 February 2018.

He scored his first Fulham goal against Bristol City on 21 February 2018.

He has in the U19 and U21 levels of Serbian team and won the UEFA U19 Championship in 2013 at Lithuania. He was the top scorers in the tournament with four goals and won the Golden Player in the same tournament.

After a successful career at the junior levels, he was called up to the senior squad during 2014 FIFA World Cup Qualifiers.

He made his international debut for Serbia against Belgium on 7 June 2013 and scored his first international goal against Croatia on 6 September 2013.