Gossip 21 Years Ben Simmons's Net Worth in 2018: Know about his Salary, Career and Awards

21 Years Ben Simmons's Net Worth in 2018: Know about his Salary, Career and Awards

Ben Simmons, the versatile Australian basketballer player is the 2016 USBWA National Freshman of the Year currently playing for the Philadelphia 76ers in the NBA. 21-year-old Ben Simmons playing as a point guard/forward has gained a lot of fame and jaw-dropping contracts soon after his NBA debut in 2016.

Besides enjoying the lovely relationship with American singer-songwriter Tinashe, the 6ft 10 inches tall basketballer is also enjoying the estimated net worth of $75 million including his endorsement and career salary. So, how much salary does Simmons earn? Let's know all about his net worth, endorsement, contracts, and salary in this section.

Net Worth and Salary of Ben Simmons

The jersey number 25 power player of the Philadelphia 76ers, Ben Simmons has played for the only team after being picked by the 76ers in the 2016 NBA draft. Well, he was named the third Melbourne-born number one overall pick in 11 years after Andrew Bogut in 2005 and Kyrie Irving in 2011.

With his 2 seasons in the NBA, Ben is reported to have earned the total of $12,072,000. And with his massive million dollars endorsement with Nike, Simmons is reported to be enjoying the estimated net worth of $75 million as per COED in 2018.

Currently, for the 2018 season, Simmon's annual salary is reported to be $6.43 million, though the highest paid 76ers players like Joel Embiid and Robert Covington earn $25.25 million and $10.464 million.

Really a drastic change in net worth over a year, which is leading the fans to estimate another jaw-dropping rise in his worth after he signs a new contract.

Though, meanwhile, no news of Ben Simmon's new contract is out. Then let's know about his professional career contract and salary to date.

Though, he is not far from the fines, as he was fined $2000 for ejection while on their match against Toronto Raptors.

Not much information on Ben Simmons' endorsement deal is out yet. However reportedly, on June 6, 2016, he signed a 5-year deal with sportswear Nike for worth $20 million.

UNINTERRUPTED Exclusive: @BenSimmons25 announces he will be part of the @Nike family.https://t.co/l5B7Xq3uvB

Hope the detail of his other endorsements will be out soon.

House and Cars of Ben Simmons

Well, Ben Simmons has kept the details of his house undercover, though he reportedly lives with his family in Philadelphia house.

And talking about his cars, Ben Simmons reportedly owns a Bentley and Ferrari.

Probably, this is not the end of his property empire extension, let's wait further for more.

Ben Simmons, the attendant of Montverde Academy in Montverde, Florida, after completing Jordan Brand Classic International Game with his high school joined Bulleen Boomers of the Big V competition in June 2013 and recorded an average of 12.3 points, 8.5 rebounds, 2.5 assists, 1.3 steals, and 2.3 blocks per game.

Then following his return to Monteverde Academy for the 2013-2014 season, Ben joined Louisiana State University (LSU) on November 12, 2014.  And on January 28,  2015, Simmons was named as a starter for the East team to compete in the 38th annual McDonald's All-American.

On November 14, 2015, he made his college debut in LSU's season opener, recording a double-double with 11 points and 13 rebounds against McNeese State. Then on January 5, 2016, Simmons was dubbed the best all-around player since LeBron James by NBA Hall of Famer Magic Johnson after recording 14 points and 10 rebounds in a win over Kentucky.

Also, before being drafted by the Philadelphia 76ers, Ben was named a consensus First-team All-American and the USBWA National Freshman of the Year in 2015 at LSU. 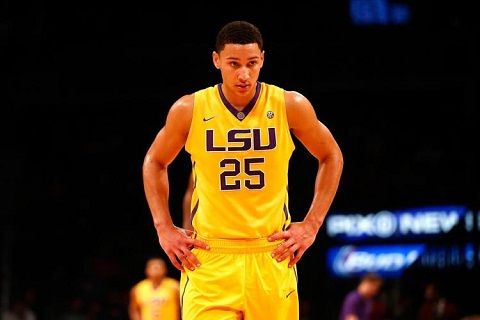 Now, playing for the 76ers as the 2016 NBA Draft, Ben Simmons has not won any major awards, though his achievements in pro-NBA seasons are remarkable. Soon after his playoff debut, he became the first rookie since Magic Johnson in 1980 to have a playoff triple-double, and became the fifth rookie with a triple-double in the playoffs, joining Johnson, Kareem Abdul-Jabbar, Jerry Lucas and Tom Gola.

Well, it's not over yet.

At the age of 15, Ben Simmons represented Australia at the 2012 FIBA Under-17 World Championship making their way up to the finals, however, lost to the United States. Later, he made his
senior debut for the gold medal winning Australian team at the 2013 FIBA Oceania Championship against New Zealand subsequently scoring  4 total points in the 2-game series.

However, after his failed attendance in the 2014 FIBA Basketball World Cup and 2016 Rio Olympics, Simmons, in October 2017, made his clear intentions to represent Australia at the 2020 Summer Olympics in Tokyo.