Zidane Iqbal is a professional football player from England and currently plays in the English league Premier League. He plays in the midfielder position for the EPL giants Manchester United. He wears jersey number 73 for United. Though he had not made his official debut for the senior team, he has already been called up to play in the UEFA Champions League.

He is the home product of Man U and also played internationally for Iraq national team Recently, in 2021 he was called up for Iraq's U23 team. He even had a score in his name in 3 appearances. He also represented Man U in Super Cup NI in 2019. He plays in the central midfield position, but can also play as an attacking midfielder. The youth talent idolizes the former Real Madrid star Mesut Ozil and plays the same role as him.

Zidane Aamar Iqbal, or famously known as Zidane Iqbal was born on 27 April 2003 in Manchester, England. According to astrologers, his birth sign is Taurus.

His father's name is Aamar Iqbal who is Pakistani by origin. While his mother's information is still a mystery, but it is sure that she is from Iraq. He also has a brother whose information is not revealed. The United's young midfielder was with his parents and brother during his signing of a contract with the club. 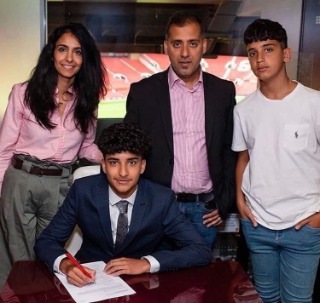 He is a Muslim by religion and is of South Asian descent. And he is also the first British Asian to play for Manchester United and that too in the Champions League.

Read also:- Who is Nico? Personal Information and Bio

His weight is around 68 kg and has long and curly black hair with a black eye.

Zidane Iqbal used to play football from an early age and even played for the local team which was named Sale United. He joined there in 2009 when he was just 4 years old. He played there for 5 years before Manchester United scouted him and signed him to their youth team. 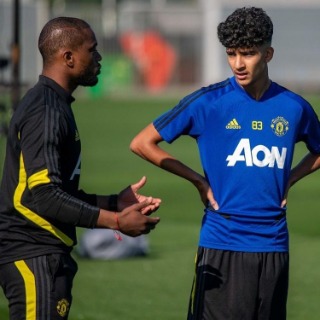 His former coach, Stewart Hammer, who used to coach him at the Under 5 level,  admitted that he would take Z. Iqbal out of the team so that the game is fair for their opposition. He was that good from an early age. He said,

"We got to the point where sometimes we would have to take him off the field in fairness to the opposition because he was just too dangerous on the field and it didn't feel fair on the others."

That was not a joke as he has already represented United in the UEFA Champions League.

How much does Iqbal earn at Manchester United || Contract and Salary

Zidane Iqbal has an estimated net worth of less than $50,000 and to be precise it is £21,060. It includes all his properties, assets, houses, and cars.

He is just at the beginning of his football career and has not made too much money, but surely, he can earn more in the future if he continues to play like that.

Besides, he also earns from sponsorship at a very young age.

Contract and Salary at United

According to SalarySport, Manchester's midfielder earns about £7,280 per year. So, he makes 140 pounds per week. It is one of the lowest salaries of a football player But it is justifiable that, he is such a young guy. 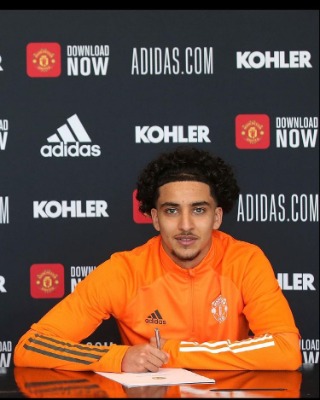 Read:- Leandro's net worth, and luxuries

At just 18 years of age, he has already been sponsored by Puma. Puma is one of the biggest brands that make athletic and casual footwear.

It is not sure, when and where they had partnerships deals but it is sure that it was before July of 2021. On July 22, 2021, he posted a photo of him promoting Puma's shoe with the caption Faster football @pumafootball on his Twitter. 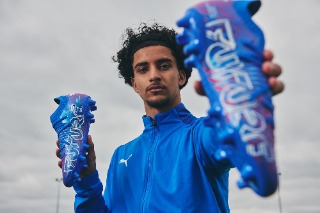 No doubt, brands like Puma and others can't wait to sponsor him in the future.

A famous he is on Instagram and footballing world, he is very much quiet regarding his private life or dating life. He rarely shares about his love life on his social media too And he appears with girls who can be called girlfriends out of an option.

Zidane Iqbal is a close person and quite secretive about his relationship. He has never shared a picture with any girls except family and relatives.

So, he seems to be single as of 2022 and does not seem to be dating anyone. But who knows, the star can be dating secretly. Why make public about his relationship and tell everyone. So, his fans should wait for more to find about his love life.

Read:- Who is Mikael's partner Amalie?

He is an active Insta user where he frequently posts about his games, training and time with family and friends. His Insta id is @z10ane which has te than 298,000 followers. 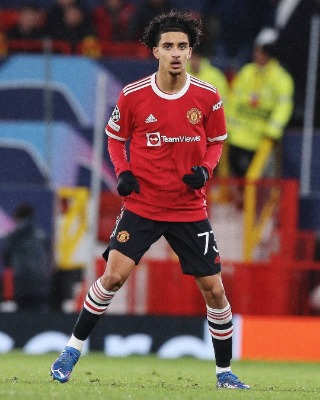 In his latest post on Twitter, he thanked Manchester United for giving him a platform to grow up as a person and his profession. He said,

"Unbelievable feeling to make my professional debut at Old Trafford. I have grown up supporting this club and to represent Manchester United in the Champions League is an incredible honour. This would not have been possible without the support of my family, friends and coaches."