Mikael Uhre is a professional football player from Denmark and currently plays in the Danish league Superliga. He plays in the forward position for Brondby IF. He wears the number 11 on his shirt. Previously, he was in SonderjyskE that he left in 2018 and was with Skive from 2016-18.

He is also named in Denmark's senior team in 2021. Before, he used to play in the Denmark U21 from the 2016-17 season. Prior to his inclusion in Denmark's national team, he was already included in the Denmark League XI, which is an unofficial football team run by Denmark's Football Association.

Who is Mikael? Personal Information and Bio

Mikael Uhre was born on September 30, 1994, in Ribe, Denmark, and his birth sign is Libra.

Information regarding his parents information is still under the radar. He has never talked about his father and mother in the public neither mentioned them in his social media. He is very close with his mother and never forgets to appreciate for her contribution. He once he posted the photo of his mother in his Instagram and added the caption,

"Ibu is lucky to have you as a mother"

Mikael Uhre is the home product of Skobland and played there until he turned 12 years old. Then he transferred to Grindsted GIF and spent 3 years of his youth career there.

Later in 2011, he moved to Sonderjysk and after playing for complete 2 years, he was included in their senior team squad. On his 19 appearance with them, he only scored 1 goal. So, he was loaned to Skive up to 2015 and transferred permanently there.

The breakthrough of his career came in 2018 when he joined Brondby. As of 2021, he has made 101 appearance with them and scored 42 goals for them. In the 2021/22 season, he scored 11 goals making him the highest goalscorer of the Danish Superliga of that season.

An average looking Danish forward is very much known for his speed and strength. He is equally incredible in the air.

Uhre's Net worth, Salary and Contract

Mikael Uhre has an estimated net worth of less than $300,000. His primary source of income is from playing football with different teams. 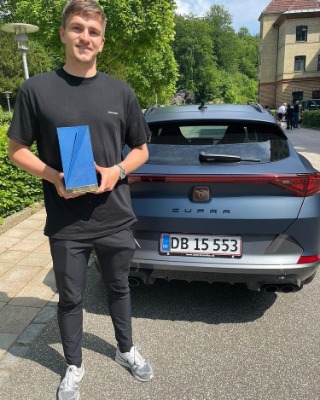 According to transfermarkt, his market value is 2 million pounds. Having played professional football for more than 8 years, he has not been able to land the interest of top clubs.

The 2020 December's Brondby Player of the month is very fond of visiting different places and often posts about it on his social media.

Mikael Uhre is currently happily married to his wife, Amalie Brandh. The couple has been with each other for more than 5 years. 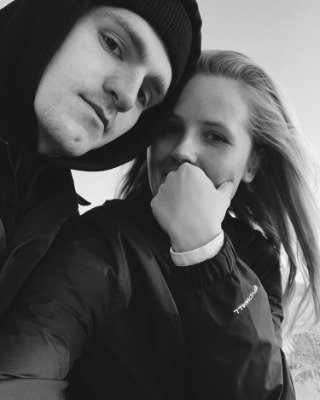 He is often seen together with his wife Amalie on different occasions and shares about them. He always shows his love towards his lifetime date even referring as the lifetime contract, jokingly.

Who is Mikael's partner Amalie?

Mikael's wife Amalie is a cute girl of age same as her husband Mikael. She is mostly known for being the girlfriend or wife of Danish footballer Mikael Uhre.

A. Brandh celebrates her birthday every year on March 31. And Mikael always wishes her on her birthdays. As of March 31 of 2021, she turned 27 years old. So, there is not much difference in age between the lovers.

She is active on Instagram with the username @amaliebrand and has more than 1,500 followers. On her Insta, she has a name Amalie Brandh of Uhre. Since, her Instagram is set to private, we couldn't extract further information regarding Mikael's wife Amalie.

It is not sure what Amalie does for a living. One time, her husband posted her photo and referred her as a personal nurse. So we guess, she might be nurse. But it is not sure, since he might have said that as someone who takes care of him personally.

Mikael Uhre: Father of a son

As per his Instagram, the couple are blessed with a child name, Mikael Jr. who was born on 2021. 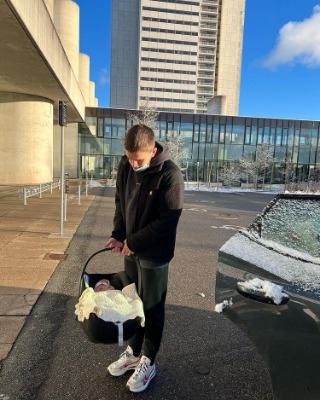 Recently on Christmas, he posted a photo of him holding a small baby in the basket and quoted,

"Already got the best Christmas present of the year to take home."

But he already announced the news of his pregnant wife earlier this year. In the July of the same year, he posted his photo with his wife who was seen pregnant at that time. As expected, Mikael's son was born in the December of 2021. He even captioned,

"The coffee bill will increase a lot in the coming time. (Referring to his upcoming child)"

The 2021 Tipsblades Player of the Spring has already made his national teams debut on November of 2021. The match was against Scotland and was for the 2022 FIFA World Cup Qualification. They lost by 0-2 against Scotts and he was brought up in the 72nd minute.