Nico Elvedi is a professional football player from Switzerland and currently plays in the German league Bundesliga. He plays in the center-back position for Borussia Monchengladbach. Previously, he played for the Swiss club Zurich before moving to Germany. He wears the Number 30 shirt for his current club and can also play in the right-back position.

The Swiss Number 30 also plays for the Switzerland national team making his debut in 2016. At the 2020 UEFA Europen Championship, she was also included in the national squad. He also represented the Swiss in the 2018 FIFA World Cup. He was also one of the players who finished in the 4th position in the UEFA Nations League in 2019.

What is Elvedi's Net worth? His salary and contract

Nico Elvedi has an estimated net worth of $4 million. It includes all his properties, assets, houses, and cars. He earns a good amount of money by playing football professionally. Besides, he also makes sponsorship deals and brands, including Puma and Volkswagen.

He may not be one of the highest-paid football players in the world, but he has been very successful in developing himself as one of the talents of the Swiss national team. 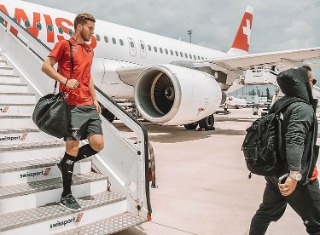 Nico Elvedi coming down from the plane SOURCE: [email protected]

According to Salarysport, Monchengladbach's center-back earns about £2,548,000 per year playing for them. That means he makes £49,000 per week.

He lives a lavish lifestyle with his girlfriend in Germany. He frequently shares his photos of visiting different places and enjoying vacations along with his friends.

At just 26 years of age, he is sponsored by some of the major brands. One of his noticeable partnerships is with Puma; he is their brand ambassador of Puma and posts about their shoes and kits on his Instagram with the phrase, Paid partnership with Puma Football. He was also one of the footballers that promoted Puma's FUTURE Z edition shoe. He promoted their brand with the caption,

His other major sponsor is Volkswagen which is a motor vehicle manufacturer. He is the representative of  Volkswagen in Switzerland. Before he participated in Euro 2020, he posted the promotion of his sponsor, stating,

And now, Elvedi is working with Nike. Not only football kits and motor vehicle brands, but he also has a sponsorship deal with Bang and Olufsen, which is an electronic products company that is of high quality.

Who is Nico dating? Who is his girlfriend?

Nico Elvedi is currently dating his girlfriend, Alexandra Crum. The couple has been together for more than five years. Mainly, Nico started dating his GF in 2016. If we check out his Instagram photos, we can find plenty of pictures of him and his girlfriend. The couple appears together on different occasions and frequently posts about them.

Read also:- Who is Safyan S. married to? His relationship status and married life

Who is Nico's girlfriend, Alexandra?

Nico's love Alexandra was born on August 28, 1996, like her boyfriend, Nico. So there is not much difference between the age of the lovers. Nico frequently wisher her girlfriend on her birthday. There is no additional information about the past relationship of Swiss footballer NE4.

Who is Nico? Personal Information and Bio

Nico Elvedi was born on September 30, 1996, in Zurich, Switzerland, and his birth sign is Libra. And Nico started building his interest in soccer and even started playing at the local level early. He trained and played his youth career at FC Greifensee between 2005 and 2006 before moving to Zurich in 2006.

The talented Swiss center-back did not take much time and was included in the senior team of Zurich in 2013 at the age of 16 years old. Besides, Elvedi is also included in the national team of Switzerland, competing in the FIFA World Cup 2022.

How tall is Elvedi?

Elvedi is a tall guy with a height of 6 feet 2 inches. He has an average weight of 81 kg.

He represents the Swiss national team and plays in the center-back position with the name Elvedi and the number 4 on his shirt.

Are Nico and Jan Elvedi related?

Nico Elvedi and Jan Elvedi share a relationship of brothers. They are twin brothers, both on September 30, 1996.

Bothe Elvedi brother is a professional footballer, and both twins play in the center-back position. Both have very many characteristics, and even more, their appearance is the same. 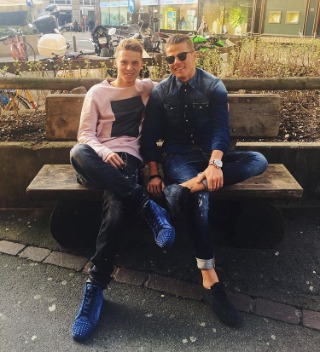 Sources even claim that their mother used to be confused about identifying the brothers sometimes.

Who is Nico's brother Jan?

Jan Elvedi is a professional football player from Switzerland and currently plays in the German league Bundesliga. He also plays in the center-back position for the Jahn Regensburg. He has been playing for them since 2020.

Unlike his bro Nico, he has not yet represented the Swiss national team.

He was one of the critical players of Switzerland that reached the quarterfinals in the 2020 Euro Cup. In the quarters, the Swiss lost to Spain in a penalty shootout after drawing 1-1 the whole time.

He also had three goals altogether in his name and even played World Cup in 2018.

Nico is highly active on his Instagram and frequently posts about his games, training, and time with family and friends.

His Insta username is @nicoelvedi30, and he has more than 79.3k followers.