If you love watching boxing, then Vito Antuofermo must not be a name. Vito is a well-known Italian-American professional former boxer and actor. He is best known as the former undisputed World Middleweight Champion. Vito has won several titles, including the European super welterweight title, WBA, WBC, The Ring middleweight titles, and a few more.

Vito Antuofermo was born on February 9, 1953, in Palo Del Colle, Italy. He is among the two children born to his parents. Vito rose to fame only after his successful career, so there is not much information about his early life and his parents. His family moved to the United States when he was 17 years old. In his early days, He owned and ran two Coca-Cola delivery routes with his brother.

In 1976, Vito competed for his first title match against Eckhard Dagge in Berlin. He won the fight and the title of European super welterweight. In the next match, he defended his title. However, at the end of the year, the boxer lost the title against Maurice Hope. Then, in 1979, Antuofermo won WBA, WBC, The Ring middleweight titles. Like that of his first title, he retained it in the next match but lost shortly after.

In 1985, Antuofermo fought his last match as a professional fighter against Matthew Hilton. He lost the fight in the fourth round. He announced his retirement shortly after the match. Vito played fifty-nine professional fights, winning fifty, and lost seven of them.

After retiring from boxing, The boxer took some time off from the media. In 1990, Vito started his acting career in Hollywood with Goodfellas in the role of a prizefighter. The same year, He played in another movie, The Godfather Part III as Anthony 'The Ant' Squigliaro. In his acting career, Vito played in eight films. Antuofermo last starred in a movie was in 2000 in The Boys Behind the Desk. After since, He has been out of the media's reach.

Vito Antuofermo Married Life; Who is his Wife?

Vito is not only successful as a professional boxer but also a successful family man. He is married to his wife, Joan, for more than forty years. The duo got married in the mid-1970s. Both of them have not shared a single word about their marriage. 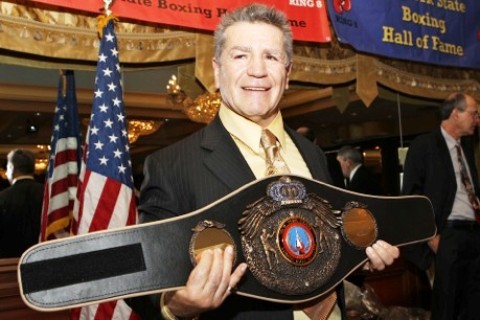 Vito was inducted into the New York Hall of Fame SOURCE: Pro Boxing

Vito the proud father of four kids, Lauren, Vito Jr., Pasquale, and Anthony. One of his sons is following his father's footsteps and is a boxer. He has become very much successful in keeping his personal life away from the media.

Following the information available, We can be pretty sure that Vito had earned more than $1 Million at the time of his retirement back in 1985. He earned much of his net worth from his fighting career. Also, Vito must have made a reasonable sum from his acting career and appearing in several advertisements.