Tyler Reddick is a rising American professional stock car racing driver. He is currently competing as a full-time driver in the NASCAR Cup Series, driving the No. 8 Chevrolet Camaro ZL1 1LE for Richard Childress Racing. Reddick is a two-time champion in the NASCAR Xfinity Series, winning consecutive titles in 2018 and 2019.

Tyler Reddick was born Tyler George Reddick on January 11, 1996, in Coring, California. He is the son of Clarence Reddick and his wife, Geri Reddick. Much about his early life and his parent is under the radar. Reddick us yet to utter a single word about his education and academic qualification. Tyler stands five feet and five inches tall and weighs 59 kg.

Tyler Reddick has an estimated net worth of more than $5 Million. He credits most of his net worth through his successful career as a race driver. A race driver has a fixed salary with the franchise and earns the prize money after winning an event. Reddick must be making millions from his sponsorship deals with numerous brands like Realtree, Alsco, MotorTrend, and a few more. 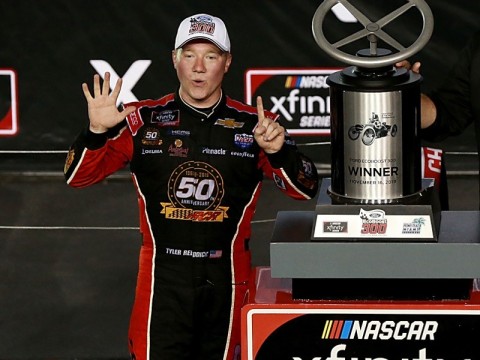 Tyler shares a photo with his title at NASCAR events SOURCE: Getty Images

Since 2016, NASCAR has been banned from publishing its driver's salary and income from the events. Tyler took home $280,997 as his earning in the 2014 season. The following seasons, Reddick made $734,358 as his salary and earnings. Since then, Neither his franchise nor Tyler has shared his income sources and the salary report to the public. He is very much early in his career and will be making millions in the future.

Tyler is involved in a romantic relationship with his longtime girlfriend, Alexa De Leon. The love birds have been dating each other for more than three years. Tyler first posted with his love life in December 2018, attending an event together. They have not shared about their first meeting instance in the media. Both of them seem to be very much supportive of each other.

Tyler shares a photo with his girlfriend and son SOURCE: [email protected] Reddick.

In July 2019, Alexa opened about expecting a baby shortly through a post in her Instagram timeline. In January 2019, The family of two extended to four with a son, Beau. The family of three is living a happy life. The love birds are yet to get engaged or tie their wedding knot. They must be waiting for the right time.

Tyler started his racing career at the age of four. He started his career at the Outlaw Karts and moved to mini sprints, midgets, etc. Reddick became the youngest driver to qualify for the pole position at Eldora Speedway World 100 and the youngest to win at the East Bay Winter Nationals. The driver made his ARCA Racing Series debut in 2012 and the NASCAR K&N Pro Series East at Rockingham Speedway.