Ross Chastain was born Ross L. Chastain on December 4, 1992, in Alva, Florida. He is among the two children born to Ralph Chastain and his wife. Ross has a younger brother Chad Chastain who is also a professional racing driver. Chastain is the first generation of his family to race competitively. He graduated from Riverdale High School and enrolled at the Florida Gulf Coast University.

Ross Chastain has an estimated net worth of more than $2 Million. He has earned most of his net worth through his contract and salary with NASCAR. In 2014, Ross took home $129,000 as his salary, and the following year, He increased his earning to $877,840. Totaling his prize money from the NASCAR Xfinity Series, it sums to $1,007,440. 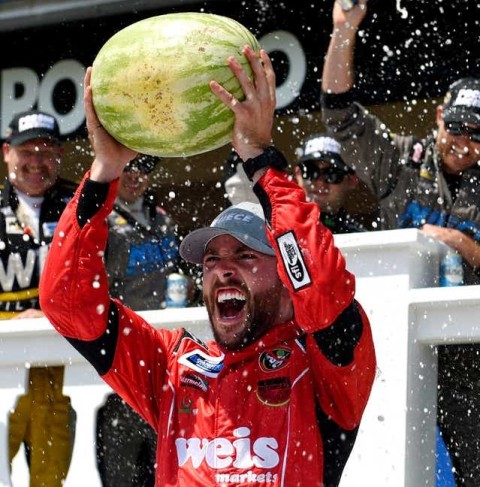 Ross shares a photo with watermelon after a race SOURCE: News-Press

Ross has a sponsorship deal with clover, McDonald's, AdventHealth, Caregility, Chevrolet, and a few more renowned brands. He must be making a handsome amount through his deals and contracts with the partners. Ross makes an annual salary of $300,000 from CDM Sports.

Who is Ross Chastain Dating? Know About His Girlfriend and Relationship Status

Ross is an active social media user. He keeps sharing numerous photos of his races, training, family and friends. Chastain is very close to his family and friends. He has successfully kept his personal life away from the reach of the media. The driver is believed to be single as of 2021. However, Following his posts, it seems like Ross is involved in a romantic relationship with his girlfriend.

Ross started racing from the age of twelve. He rose to fame after winning the 2011 World Series of Asphalt at New Smyrna Speedway, winning three of eight events. After the series, NASCAR approached him and signed with them. The following year, He participated in numerous events. In 2013, Chastain drove in 15 Camping World Truck Series races for Brad Keselowski Racing but moved to RBR Enterprises in 2014.

Ross made his Xfinity Series debut in 2014 and also joined the team for a part-time NASCAR K&N Pro Series East effort that year. In 2017, Chastain scored a top-five at Iowa and two top tens and finished 13th in points, the highest of the non-playoff drivers. The following year, The racer won his first major title at the 2018 DC Solar 300 in Las Vegas.

In 2019, Ross won numerous events, including 2019 Circle K Firecracker 250 at Daytona, Digital Ally 250 at Kansas, and Grander RV 150 at Pocono. In early 2021, Chastain became a free agent and signed with Chevrolet Camaro ZL1 for Trackhouse Racings. He has a trend of smashing a watermelon to the ground in Victory Lane.