Ryan Preece is a well-established American professional stock car racing driver. Ryan won the NASCAR Whelen Modified Tour championship in 2013 after being the runner-up in 2009 and 2012. Preece competes full-time in the NASCAR Cup Series, driving the No. 37 Chevrolet Camaro ZL1 1LE for JTG Daugherty Racing.

Ryan Preece was born Ryan Jeffrey Preece on October 25, 1990, in Berlin, Connecticut. He is among the three children born to Jeff Preece and his wife. Ryan has not shared about his parents and siblings to the media. He graduated from Xavier High School and did not continue his further education.  Preece stands six feet and weighs 70 kg.

Know About Ryan Preece's Career Earnings, Net Worth, and Sponsors 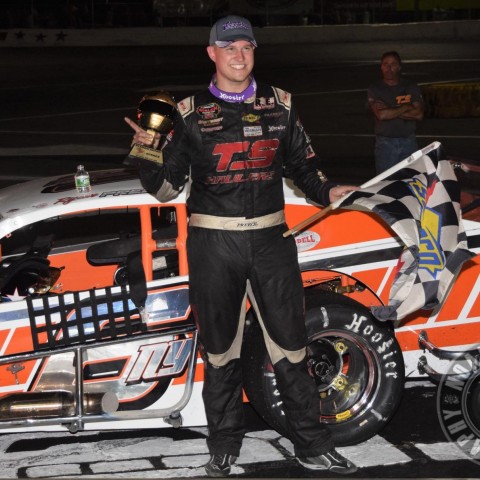 Ryan shares a photo with his Islip 300 title SOURCE: Reddit

In 2018, Ryan signed a two-year contract with the JTG Daughterty Racing and renewed his contract in November 2020. Preece has a sponsorship and partner deal with numerous American brands like Hyperco, Magnus, Hunt Brother, Waddell, and a few more. He is very much early in his career and will be making millions in the future.

Ryan is a married man living a happy married life along with his wife and their family. Ryan walked down his wedding aisle along with Heather DesRochers. The duo got married in a private wedding ceremony in 2017 after dating for several years. As per sources, They met each other at the Stafford Motor Speedway in 2009 and the friendship turned into a relationship shortly. Heather is also a racing driver and a participant in NASCAR's Drive for Diversity. They competed against each other in the SK Modified Series in 2011, where Preece won the championship and DesRochers was the Rookie of the Year. Although It's been more than a decade of their relationship and four years of marriage, the duo has yet to welcome a new member into the family.

Ryan started his racing career in 2007. He came to the spotlight in 2008 after finishing third at the Monadnock. Preece competed in and won the championship in the SK Modified Series in 2011. In 2013, The racer won his first  NASCAR Whelen Modified Tour title. In 2015, he drove for TS Haulers Racing, owned by Ed Partridge.

Preece has been part of the Xfinity Series since 2013. He remained with the franchise until 2016 and then took a break and returned in 2018. Since 2018, Ryan has been competing for the JTG Daugherty Racing as a full-time driver. He extended his contract in November 2020, but much about the contract is still under the radar. In 2021, Ryan made his NASCAR Camping World Truck Series debut and won the Rackley Roofing 200.