Tyler Johnson is an American professional basketball player who is currently a free agent. Before, he played for Phoenix Suns (2019–2020) and Miami Heat (2015–2019) in the NBA as well as for NBA G League Sioux Falls Skyforce (2014–2015) as their Point Guard/Shooting Guard.

The Point Guard/Shooting Guard, Tyler Johnson was born on May 7, 1992, in Grand Forks, North Dakota. As per his nationality, he is American and belongs to the White ethnic group. Further, his star sign is Taurus.

Tyler so far has made earnings of $52,223,512 from his entire NBA career. Kept aside Johnson's financial earnings, his personal assets include home and cars.

Tyler was the third best-paying Miami Heats player in 2018 and scheduled to be the 17th best-paying guard in 2019. In addition, Johnson's earnings are 230.6 percent higher than in 2017-18. Besides Chrish Bosh and Hassan Whiteside are expensive players than Johnson in Miami Heats.

Tyler got married to Ashley Fletcher and he is very close to his beautiful wife. Moreover, they have a four-year-old son Daemon. 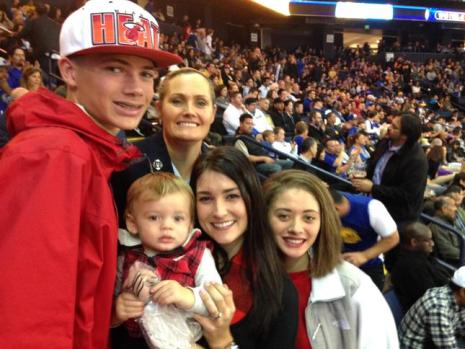 Tyler's mother is working at the United States Air Force in the rank of Master Sergeant. Besides, Tyler has a very supportive family and is getting a lot of help in his career upliftment.

The Famous NBA star Tyler is 6 feet 4 inches tall in height and weighs around 86 kg. Johnson is not only a world-class athlete but also a very attractive individual.

Other than being a famous NBA Point Guard/Shooting Guard, he is pretty famous in social media with a huge number of followers. Johnson has 22.6k followers on his Twitter account.

Off the court, Johnson has the hobby of cooking different foods.

Tyler was born to parents Milton Johnson and Jenifer. Tyler spent his childhood with his brothers Brandon, Logan, Gabe, and sister Lauren.

Johnson attended Saint Francis in Mountain View, California where he played for his high school basketball team. After completing high school, Tyler enrolled at Fresno State University and played for it.

As a senior, Tyler was appointed to the second team of the All-Mountain West Conference and shot 43,2 percent from three points.

Johnson joined the Miami Heat for the 2014 NBA Summer League after being undrafted in the 2014 NBA draft. He signed with the Heat on 7 August 2014 but was later waived by the team on 25 October.

On 3 November, he was acquired as an affiliate player in the Heat by Sioux Falls Skyforce of the NBA Development League. Johnson signed a 10-day contract with Heat on 12 January 2015.

On March 2, he played a season-best game with 26 points and 4 steals, winning the Phoenix Suns 115–98. Five days later, he scored 24 points and played 44 minutes off the bench in a career-high, helping the Heat defeat the Kings of the Sacrament, 114–109.

Johnson became a limited free agent after the 2015 - 16 season. On 6 July 2016, he received an offer sheet of $50 million from the Brooklyn Nets for four years. Four days later, the Heat matched the contract offer from the Nets and re-signed Johnson. 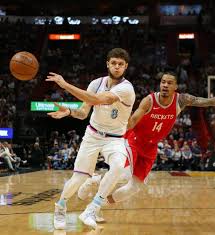 Johnson scored 22 of his season-high 31 points in the third quarter of the Heat 117–111 win over the Orlando Magic on 30 December 2017. Other point guards of Miami Heats are Dwyane Wade and Goran Dragic.

Moreover, Johnson was traded to the Phoenix Suns On February 6, 2019, along with Wayne Ellington,  in exchange for Ryan Anderson.

Facts and stats of Tyler Johnson