Troy Brown Jr. is an American professional Basketball player who plays in the National Basketball Association (NBA). As of 2018, Troy Randall Brown Jr. currently plays for the Washington Wizards as their Small forward/Shooting guard.

As a Small forward / Shooting guard, Troy Randall Brown Jr. reportedly earns around $2,984,280 as his yearly salary from Washington Wizards.

Troy Randall Brown Jr. was born on July 28, 1999, in Las Vegas, Nevada to parents Troy Brown Sr. and Lynn Brown. As per his nationality, he is American and belongs to African ethnic group. Further, his star sign is Leo.

After completing high school, Troy Randall Brown Jr. enrolled at the University of Oregon and played for the Oregon Ducks men's basketball. On 10 November 2017, Brown made his college debut with 18 points in a win against Coppin State University. Brown averaged 11.3 points, 6.2 rebounds and 3.2 assists per game in his lone season in Oregon.

Troy Randall Brown Jr. so far has made earnings of $2,749,080 from his entire NBA career. Moreover, he is 11th best-paid player of Washington Wizards while Markieff Morris, John Wall, Kelly Oubre Jr. are among the highest earner of the team.

In addition, his projected salary for the next 4 seasons are:

Further, he is projected to be the 7th best-paid player of Washington Wizard in 2019-2020 season. 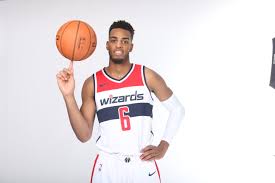 In addition, he wears jersey no 6 and currently playing along with Otto Porter, Jason Smith, Troy Brown Jr. and many more.

The Famous NBA star is 6 feet 7 inch in height and weighs around 98 kg. Other than being a famous NBA Small forward / Shooting guard, Troy Randall Brown Jr. is pretty famous in social media, having 38.1k followers on Instagram and 11.8k followers on Twitter.

In addition, Brown seems to be focused on building his career and has hidden his romantic relationship/affairs from the general public.