TreVeyon Henderson is an American college football player from the United States who is currently playing in the Big Ten Conference. He plays in the Running back position for the Ohio State Buckeyes. He is in the freshman class of the Ohio State University. On Week 3 of 2021, he was named the Big Ten Offensive Player of the Week and was also awarded the Big Ten Freshman of the Week.

The Buckeyes' running back went to play high school football at Hopewell High School. He recorded a 4000-yard rush and 50 touchdowns. He was named in the USA Today All-American in 2019. Later on January 1, 2022, he also attended the Rose Bowl program.

TreVeyon Henderson, famously known by the name, Henderson was born on October 22, 2002, in Hopewell, Virginia. According to astrologers, his star sign is Leo.

His father's name is Trenton Henderson while his mother's name is Lakeesha Hayes-Winfield. TreVeyon has barely talked about his father and what he does. But he also has a grandmother Stephanie Hayes.

The Ohio State Buckeyes running back grew up in the rough community of Hopewell. According to his mother, there was a regular shooting going on the streets and she would not let her child play in the neighborhood.

Once she remembered when her son came running to the house and there were people shooting. She said,

“I guess he felt like the gunshots were coming towards us so he dropped everything and ran in,” She also added, "There’s been shootings a street or two over. Not really on my street, but close to home."

TreVeyon attended Hopewell High School and played football there. Later, he committer to play for Ohio State University. And has already broken freshman records for Touchdowns with 19 scrimmages.

Though the Henderson brothers grew up in the rough neighborhood of Virginia, all of them have established themselves as top-rising talent.

His elder brother, Ronnie is playing college football at the University of Virginia. He plays in the running back position for the Virginia Cavaliers.

CAPTION: TreVeyon Henderson with his mom and his brothers SOURCE: https://www.elevenwarriors.com/

While his younger sibling Kesean Henderson is also playing football at Hopewell High School. Sources claim that the University of Virginia has already offered him a scholarship.

TreVeyon's Height and Weight: How tall is he?

TreVeyon has a muscular body with black eyes and short black hair. He follows the Christianity Religion and represents African-American ethnicity.

What is the Net worth of Henderson? Earning as a college player

As per sources, the estimated net worth of TreVeyon Henderson is estimated to be $50,000. But the athlete has never confirmed his earnings and paycheck. Who is sponsoring Henderson?

Previously, college athletes could not even earn from sponsors. They just had to play college football. Recently, the new rules of the NCAA hit the news as it allowed college athletes can be partnered with brands and earn.

The rules make the college players be eligible to earn from different aspects except for salary in the team. Like many other athletes, TreVeyon is also one of the players to earn from his deals.

Read: How Much Is Dupree's Net Worth In 2021 || Contract and Salary

One of his major sponsorship deals is with a company named Ricart. Ricart is a platform that deals with new and used car dealerships of different brands including Hyundai, Nissan, Ford, Genesis, etc. 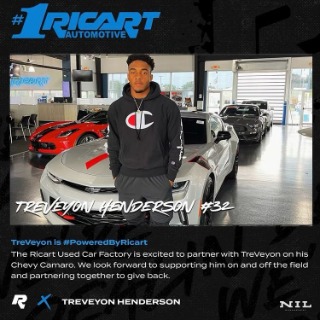 It is based in Central Ohio and has sponsored various athletes like Ej Liddell and many others. The Buckeyes running back announced the partnership with Ricart Automotive through his Instagram.

Ricart also confirmed the deal between the two parties and mentioned TreVeyon through their Instagram. THey posted a short video in which Henderson was driving the car. They captioned it,

"We’re proud to partner with TreVeyon on giving back to our #Buckeye community to a local charity."

At just 19 years of age, he is already the owner of a car. his car is of white color of brand Chevrolet.

The car is sponsored by his sponsor by Ricart Automotive company.

Who is T Henderson's secret girlfriend? Is he dating anyone?

TreVeyon Henderson is a very closed person who has never shared his love life with the public. He prefers to keep his private life out of media reach. Besides, he also has never shared any info about his relationship on social media. 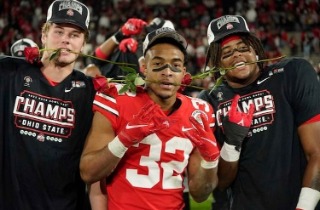 Though he uses Instagram, we can't find any pictures with his girl. But he frequently shares about his games, training, and time with friends.

Read: Who is Caleb dating?

TreVeyon Henderson is also active in social media like Instagram with the username @trey.h.4 and currently has more than 54,000 followers.