Tim Krul, born Timothy Michael Krul, is a professional football player from the Netherlands who plays for the EFL Championship club Norwich City and the Netherlands national team. Krul's prominent position is a goalkeeper, and he wears jersey number 1 on his team.

As we know, Krul is amongst the most famous faces in European football. Furthermore, Krul is one of the most experienced shot-stoppers in English football, and since 2018, he has been playing for Norwich City. Besides, he has already represented the national team in the World Cup.

Tim Krul's Salary Revealed: His Net Worth Is in Millions

Krul makes a good amount of money from being a professional goalkeeper, and from his current team, Krul receives a salary of £37,000 per week and £1,924,000 per year, as reported by Salary Sport. Being active in this sport for over a decade, Krul has got a chance to play for multiple teams. Not only that, but he had signed amazing deals with them. So, Krul has taken home a massive fortune by playing with various clubs. According to First Sportz, Krul's net worth is estimated to be around $8 million, thanks to his long-term football career.

His current market value is €2.00m, while the highest value was €9.00m on January 15, 2014. Besides making from his profession, Krul also takes money from sponsorship and endorsement deals. So, Krul lives a quality life having such an impressive fortune.

Krul Has Two Kids With His Girlfriend Turned Wife

The professional goalkeeper, Krul, is a happily married man who lives with his stunning wife, Claire Hall. It is said that Krul and Hall dated each other for some time before getting married. Krul and Hall walked down the wedding aisle in 2015, and since then, they have been sharing the relationship of a husband and a wife.

Some online sources say that Krul married his wife in a lavish ceremony, but there is not much info about his marriage as Krul has kept it private. On June 2021, the goalkeeper posted some snaps with his life partner on his Instagram handle saying, "Happy 6th Anniversary, baby." 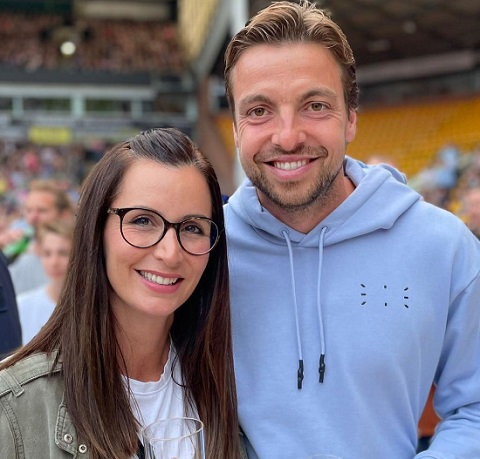 Apart from being married for a long time, the twosome has already started a family. They are the parents of two loving children, a daughter named Sophie and a son named Charlie.

Regarding his career, Krul has played for multiple teams, and since July 24, 2018, he has been representing Norwich City, with whom his contract was extended on December 25, 2020. His youth career was with Hvv RAS, ADO Den Haag, and Newcastle United. 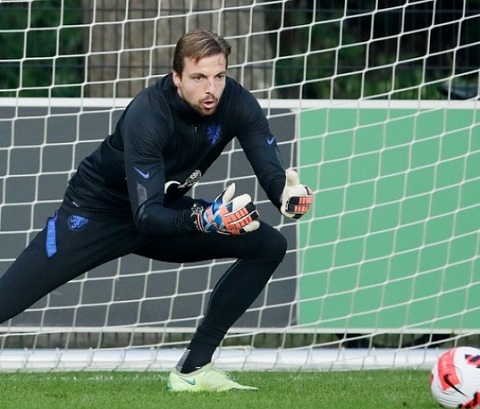 After that, he was loaned to AZ. After making 16 game appearances, Krul was loaned to Brighton & Hove Albion. On August 31, 2017, he signed a deal with Brighton & Hove Albion. Likewise, Krul has represented the national football team of the Netherlands in various games. In June 2014, Krul was included in the Netherlands' squad for Brazil's 2014 FIFA World Cup.

Details On His Parents & Family Life

Timothy Michael Krul was born on April 3, 1988, in The Hague, Netherlands. His father's name is Peter Krul, while his mother's identity remains unknown. Besides, Krul holds Dutch nationality, and he peaks at 6 feet 2 inches. Tim Krul's parents together in a frame SOURCE: Instagram @timkrulofficial

Moreover, Krul is a family person who likes to spend quality time with his family members during his spare time, and he features their moments on Instagram, where we can follow Krul as @timkrulofficial.