The Brazilian professional mixed martial Artist Thomas Guimaraes Almeida is well known in MMA (Mixed Martial Art) and UFC for his tactics and his ability to knock out his opponents with one heavy hit. He currently competes in the Bantamweight division of the Ultimate Fighting Championship.

The Brazilian turned professional in 2011 and has 7 wins by KO and four by submission. He is formerly a Bantamweight Champion in the Legacy FC.

The Early rise of the Thomas Almeida

Thomas Almeida was born on July 31, 1991, in a Brazilian province of Sao Paulo, Brazil. His father Sergio Almeida and mother Lucila Pinto noticed the dedication that their son had to become the best fighter in the world and thus gave him blessings to Thomas.

Almeida began his Muay Thai practices at the age of 13.  While in his school a boy used to steal food and bully the other children including Thomas. One day Thomas took action by kicking the boy much taller and stronger than him but later they both went on to be good friends.

Seeing his spirit and his courage to never back down from a fight his parents put him on a part-time school and started him to train at Chute Boxe Academy in Sao Paulo.

Income and Net Worth of Almeida

The 26 years old fighter who is known as the Terminator in the ring enjoys a net worth of $600,000  thousand with the UFC earnings of  $393,000  which includes bonuses and his UFC Reebok endorsement deals.

Despite, his KO loss to Cody Garbrandt at the UFC Fight Night 88, he was able to cash $25,000 including show amount and Reebok sponsorships.

With various awards, Almeida was able to cash in big amounts and with big names like Conor McGregor,  Ronda Rousey and Georges St-Pierre UFC have been able to globalize its position among top sports and with 13th rank in the division Almeida is sure to make big money in his career.

Thomas who is often known by his nickname Toto given by his teammates made his professional debut in September 2011. With management by Wade Hampel of Big Fight Management, the Brazilian fought fiercely in his native country with a standout record of 8-0 with 4 wins via KO. He is one of the fast-rising fighters with a record of 22-3-0. 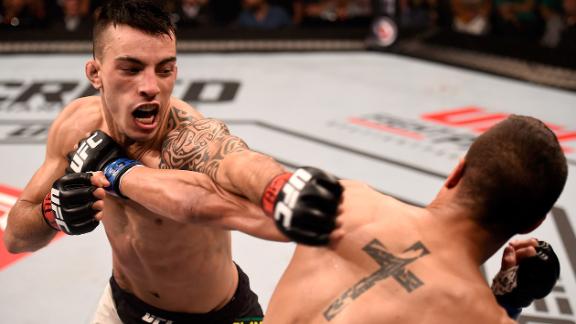 Achievements and Awards of Almeida

The 26 years old UFC fighter is active on Twitter and Instagram and updates his profile with various up-coming events and promotions. Almeida who stands 5 feet and 7 inches tall and with his good looks and great physique still seems to be single. There is no detail about his girlfriend, his marriage or any rumors nor any affairs.