Tenshin Nasukawa is one of the best fighters in Japan who specialize in full contact Karate, Muay Thai, and Kickboxing. He is the current Rise featherweight champion and has previously held the titles of bantamweight and flyweight divisions. After defeating champion fighters such as Amnat Ruenroeng, Wanchalong, and Kyoji Horiguchi, he gained prominence.

As of November 2020, Combat Press ranked Nasukawa as the No. 8 bantamweight fighter in the world. His knockout victory over Wanchalong PK Senchaigym was chosen as the 2016 knockout of the year by Combatpress.com.

Tenshin Nasukawa Salary and Net Worth

Not to mention, Tenshin Nasukawa has earned his wealth widely through his professional kickboxing career, establishing him as one of the elite Japanese fighters at a very young age.

Tenshin is projected to fight against the highest-earning athlete on the planet, Floyd Mayweather Jr, which will increase his value in monetary terms. Like MMA fighter Conor McGregor, Nasukawa is expected to make a huge amount, probably in millions which will also be the highest-earning of his career. His opponent Floyd reportedly made around $9 million from that exhibition fight. 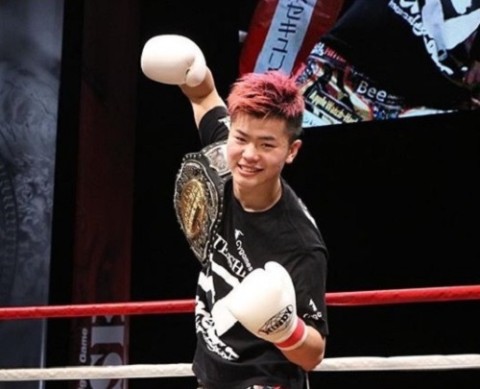 Tenshin has earned the most through kickboxing SOURCE: Sports

With a Floy bout, Nasukawa is now a famous face in fighting. The companies and brands trying to swap endorsement deals with the kickboxer are also increasing every day. As of now, he has a deal with some popular brands like TAG Heuer. He can be seen promoting the watches through his Instagram, where he has 279k followers. Prior, he also has a sponsorship deal with Nike. He can also be seen promoting Beauty Mall.

Chiba Prefecture, Japan native Tenshin Nasukawa, was born on August 18, 1998, under the star sign Leo. As per nationality, he is Japanese and is of Asian ethnicity.

At the tender age of five, his father, Chiba Prefecture, enrolled him in a Karate class. But the idea of sending him to Karate classes was to teach discipline to him. Also, his father wanted his son to reap the psychologist and spiritual benefits of martial arts.

By the time he was in his 6th grade, Nasukawa had won national-level competitions. Furthermore, he grabbed the attention of many MMA promotion companies, including K-1 Kickboxing and Pride Fighting Championships.

Before turning pro kickboxer at his 18, Nasukawa compiled an impressive record of 99 wins and 5 losses.

Since 2014, Nasukawa has been fighting professionally, compiling an undefeated record of 27-0-0. Known as a southpaw fighter and the combination of kickboxing and Full Contact Karate style, his career titles and accomplishments are listed below:

On September 30, 2018, Nasukawa faced the current Rizin Bantamweight Kyoji Horiguchi at RIZIN 13, which was contested under kickboxing rules. The bout ended in round three, with Nasukawa the 1st Rise Featherweight (-126lb) World Championship.

Now, Nasukawa faced undefeated boxer Floyd Mayweather Jr. at Rizin 14 on December 31, 2018, in a 3-round boxing exhibition match. Mayweather defeated him via TKO in the first round, dropping him down the ground with a powerful right punch. Besides, he dropped Nasukawa three times earlier in the first round.

Like other public figures, Tenshin Naskawa prefers his personal life low-key. Though the kickboxer actively surfs social sites such as Instagram, Twitter, and Facebook, he has not shared a single picture with a lady who is assumed to be his potential girlfriend or wife. Also, no new rumors popped out on media sites regarding Nasukawa being romantically involved with anyone.

It seems that twenty years old hunk is much focused on his kickboxing career. Hence, he might be single and unmarried.

Besides his love life, Nasukawa has a sister named Riri Nasukawa, with whom he shares a good bond. His sister, 15, recently won her pro kickboxing debut at rising 125 in June 2018 against Reina Sato. There is no telling where his sister will be in a few years, but things are looking good following a successful pro debut.

The following year, he won against Francesco Ghigliotti and Yamato Fujita at Rizin 2017 in Yokohama: Sakura and Rizin World Grand Prize 2017: Opening Round – Part 2.