Taysom Hill is an American professional Football Player who plays in the National Football League (NFL). As of 2019, Taysom Hill currently plays for the  New Orleans Saints as their quarterback. Further, he also serves as a kick returner and utility player and has played in various positions on offense and special teams.

The former Brigham Young star Taysom Hill reportedly earns around $556,667 as his yearly salary from New Orleans Saints in 2019. Further, Taysom Hill has an estimated net worth of over $500 thousand. Hill is married to his wife, Emily Nixon since 2014.

As of 2019, Taysom Hill has an estimated net worth of over $500 thousand with is quite similar to Nate Sudfeld. He reportedly signed a 3-year contract with New Orleans Saints in 2018. Further, the NBA player has an average salary of $645,000 annually while Drew Brees is among the highest earner of the team with an annual salary of $25,000,000.

Additionally, Taysom Hill so far has made earnings of $1,025,000 from his entire NBA career.

The Saints quarterback and utility player is a married man and currently in a marital relationship with his beautiful wife Emily Nixon. In 2013, the couple got engaged after Hill proposed her in her home town of College Station, Texas. Later, they got married on April 12, 2014, in the Salt Lake Temple. 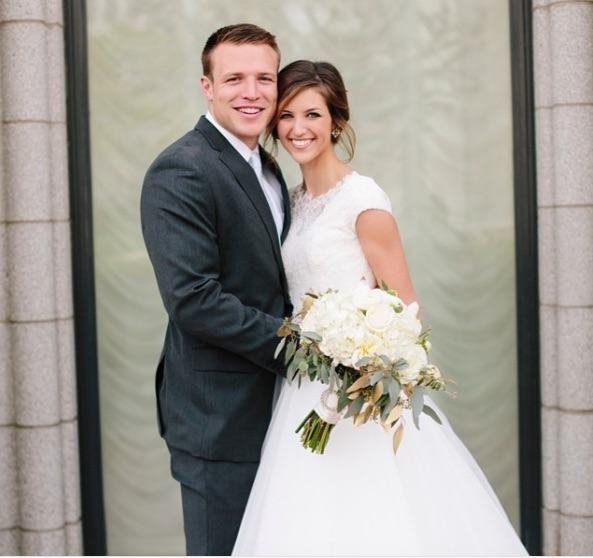 Daughter of Laura Newman Nixon and Clair Nixon, his wife Emily was born Emily Rogers Nixon on July 20, 1992, in College Station, Texas. Emily, who currently works as an accountant at Chatbooks, previously worked for McColee Partners/Snappower and Nu Skin Enterprises.

Not the outcome we hoped for or deserved tonight, but it has been an incredible season. I’m so grateful for my beautiful wife Emily for always loving and supporting me, and making my dreams possible. I love my teammates, and it has been an honor playing with each of them. Love this city and the people in it. Thanks for the love and support we have felt from so many of you. We’ll be back!! ?? #WHODAT

It appears that the couple do not have children of their own, as there is no information about their children.

Taysom Hill was born on August 23, 1990, in Pocatello, Idaho to parents Doug Hill and Natalie Hill. As per his nationality, he is American and belongs to the White ethnic group. Further, his star sign is Virgo. He grew up along with his 4 siblings.

Love these people! Grateful for such a supportive family who is willing to fly across the country for a game. #WhoDat

A day later, on 3 September 2017, he was selected by New Orleans Saints. On 3 December, he was promoted to the active roster and played against the Carolina Panthers. Hill recorded two tackles on the Panthers' kick returner Fozzy Whittaker in his NFL debut.