Taylor Kornieck is an American professional soccer player who plays for the National Women's Soccer League club San Diego Wave FC. Taylor is also a member of the United States national team and plays as a midfielder. Further, she wears jersey number 22 for the club. Additionally, she previously played for Orlando Pride.

Taylor is a successful soccer player born on November 22, 1998. She spent her youth career in her birthplace, Troy, Michigan, and holds American citizenship. Following her birth information, Taylor's birth sign is Sagittarius. Taylor also has an older brother Nick, who also plays for Doane Tigers and CSU Dominguez Hills Toros. Besides, she is also famous online, where Taylor has gathered thousands of fan followers.

How Much Taylor Is Earning From Her Profession

The professional soccer player Taylor signed one year contract with the National Women's Soccer League club San Diego Wave FC in 2022. As per the sources, she was traded for $125,000 along with Emily van Egmond. Further, detailed information regarding her salary and income is yet to disclose. Additionally, the latest survey declared that Women American soccer players make $25,000 - $85,000 per season, and the average salary of a women soccer player is around $40,000. Therefore, Taylor might also receive the same range of payments or more than that.

On the other hand, the midfielder, Mandy Laddish, makes $46,200 per year on average. Additionally, Taylor lives a lavish life and has been spotted traveling and enjoying her vacation to the fullest.

Details On Her Relationship- Is Taylor Dating?

Taylor is of private nature, and she barely talks about her love life. More, she appears to live a single life as the soccer player hasn't been exposed much about her partner. Glancing into her past love life, this can be said that she doesn't have an interest in relationships, and Taylor is focusing on her professional career rather than anything.

Kornieck never shared any posts about her partner, nor did she mention her special in any of her posts. So, Taylor's relationship status is currently a mysterious topic for us. Also, explore the professional and love life of Olivia Moultrie, a professional soccer player.

Kornieck is an enthusiastic player, and she started playing football early. She played football in her high school and served as team captain. Similarly, she was a four-year starter for the Colorado Buffaloes at the University of Colorado Boulder. 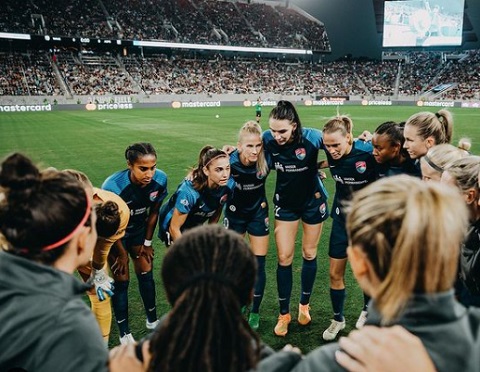 In 2020 Kornieck made a professional debut, and Kornieck was selected as the third overall choice in the 2020 NWSL College Draft. So, Kornieck and Emily van Egmond were traded with San Diego Wave FC.

The fan's favorite soccer player, Kornieck, is 6 feet 1 inch tall and a fitness lover who often remains busy with her training and match schedule. For a further update regarding her, we can also follow Kornieck on Instagram, where she is active under the username @taylorkornieck.