Olivia Moultrie is a rising American soccer player. She has been playing in the National Women's Soccer League since 2019.  In 2019, Olivia became the youngest American women’s soccer player to turn pro at age 13. Moultrie plays as a Midfielder for the Portland Thorns Academy.

Olivia Moultrie was born on September 17, 2005, in Canyon Country, California. She is the daughter of K.C Moultrie and his wife, Jessica Moultrie. Olivia was the first girl in United States history to play in the boy's development academy full-time. Moultrie stands five feet and seven inches tall and weighs 55 kgs. Olivia homeschooled and later accepted the full scholarship to play soccer for the University of North Carolina at eleven.

Olivia Moultrie's Journey to the NWSC

Olivia started training for football at the age of four. She became the first girl on a boys' club team to play in the U.S. Soccer Development Academy system. At the age of eleven, Moultire became the first and youngest  girls' soccer player to accept a college offer at the time publicly. Olivia committed to play for the University of North Carolina.

In 2019, Olivia signed a representation deal with the Wasserman Media Group. Shortly after that, She signed a multi-year endorsement deal with Nike. Although She started training with the team, Moultrie appeared in preseason but percent from signing a professional contract with the club. Under the rule of the NWSL, Franchisee is not allowed to sign players under eighteen players.

In May 2021, Olivia and her father filed an antitrust lawsuit against the NWSL in the United States District Court for the District of Oregon. Shortly after the lawsuit, the court granted a temporary restraining order against the age rule so that Moultrie can play in the regular season. She flew to Barcelona, Spain, to participate in the famous Mediterranean International Cup. 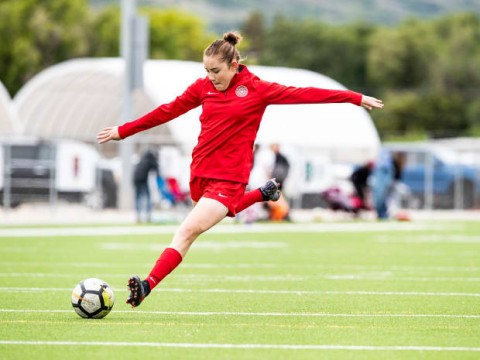 CAPTION: Olivia plays in the preseason game in the league SOURCE: Sports Illustrated

Moultrie trained with Alfredo Sainz, former soccer player and one of Southern California's most renowned trainers. She won the CONCACAF U15 gold medal with the US Soccer Youth National Team. Olivia has played for the Southern California clubs SoCal Blues SC and Total Futbol Academy.

Olivia Moultrie has an estimated net worth of more than $100,000.  She signed a six-figure deal with Nike, becoming the youngest pro women’s soccer player in the history of such things. However, Non of them has opened about the exact figure. Olivia is very much early in her career and shall be making millions from her career. The average salary of a rookie NWSL player is more than $500,000.

Olivia is an active social media user. Following her Instagram timeline with 131k followers, We can be pretty sure that Olivia is living a single happy life. She keeps herself busy traveling to various clubs worldwide. Also, Moultrie is very much early in her career to start a love life. Instead, She is very much focused on her career and making her professional debut.