T.J. Dillashaw is a well-known American mixed martial currently signed up with famous promotion UFC and is former 2X UFC Bantamweight champion. Currently, he is ranked #9 in official UFC pound-for-pound rankings. He is a well trained MMA fighter with Muay Thai, Wrestling, BJJ skill set. Turning pro on December 3, 2011, T.J so far has appeared in 20 events with total 16 wins and 4 losses.

T.J. Dillashaw Net Worth and Earnings through MMA

Talking about T.J. Dillashaw salary, he is estimated to have earned around $2,214,000 from his MMA career.  As per many tabloids, his current net worth is reportedly around $1.3 million dollars and so far his main source of income remains his career as a fighter.

He is a resident of Denver, Colorado, United States and has a lovely home there.

Moreover, he keeps his fans informed about his personal life from numerous social media. Further, the MMA fighter is a pretty fund of expensive cars and is seen driving around in some exotic brands. He is a fitness freak and possesses a home gym where he spends his time building up for fights.

T.J. Dillashaw is currently married to his then-girlfriend turned wife Rebecca Dillashaw. The married couple is living together in their Denver, Colorado, the United States based home. Before marriage, Rebecca's shared a long relationship with her boyfriend, T.J. Dillashaw.

Though he is very shy about his personal life, he has spoken about his wife in many interviews. They have one child together.

Future all star thank you @musclepharm for the experience! #babykillashaw

Besides, there is no information regarding his past affairs and relationship, nor any conflicts which can lead the couple to their separation or divorce.

Further, he is also a member of Team Bisping on TUF 14 and is a current UFC Bantamweight champion.

T.J. Dillashaw was born on February 7, 1986, and is currently 33 years old. He was born in Sonora, California, United States.  Denver, Colorado, United States, resident was interested in martial arts from a very young age.

His interest in MMA grew evidently as he was a high school and college wrestler, and as he liked fighting, he wanted to give MMA a shot developing as an all-rounded fighter, he in his UFC profile has mentioned:

"I started training after I graduated college and my college wrestling career was over. I didn’t reach all my goals in wrestling and wasn’t done competing, so, being a well-rounded athlete, I thought I could be good at fighting and I gave it a shot.".

In regards to his educational, Dillashaw is a B.S. in Kinesiology- clinical exercise science from Cal State Fullerton. T.J holds American nationality and belongs to white ethnicity. As of March 2019,  he has 273k followers on Twitter and 1.4 million followers on Instagram.

Starting his MMA career with KOTC: Legacy, he fought against Czar Sklavos and Won his debut match on 26-Mar-10 in a Unanimous Decision victory.  Similarly, in Fight For Wrestling 1, T.J fought Brandon Drucker and won the match held on 22-May-10 via a rear-naked choke in the first round.

Later on 2nd-October-2010, he fought against Mike Suarez at Rebel Fighter: Domination and won the match via Submission (rear-naked choke) in the first round.

After that, on 20-Nov-10, he entered Capitol Fighting Championships, and fought against Taylor McCorriston, won the match with TKO (punches) in round 3.

He was then seen in the fight reality show The Ultimate Fighter (a fighter hunt show under UFC). He in the Ultimate Fighter: Team Bisping vs. Team Miller fought against Matt Jaggers and won the match held on September 21 via TKO (punches) in round 1.

Additionally, on  November 2, he fought against Roland Delorme at The Ultimate Fighter: Team Bisping vs. Team Miller and won the match via Submission (rear-naked choke) in round 2011.

Later he appeared in UFC on Fuel TV: Sanchez vs. Ellenberger, and fought Walel Watson. He won his first UFC match, which was against Watson on 15-Feb-12 via Decision (unanimous) in round 3 which also marked his formal UFC induction.

Some times you just got to slap a little bitch in the face with your foot to shut their mouth. It’s funny how quiet Cody has been this time around. You scared little boy, respect your elders hahahaha when you teach a bully a lesson #ufc227 #august4th

On 11-Jul-12, he fought against Vaughan Lee at UFC on Fuel TV: Munoz vs. Weidman and won the match via Submission (neck crank) in round 1. He then appeared in UFC 158 event, and fought against Issei Tamura, winning the match held on 16-Mar-13 via KO (head kick and punches) in round 2.

In addition to that, he fought Hugo Viana at UFC on Fox: Henderson vs. Melendez on 20-Apr-13. Again winning the match via TKO (punches) in the 1st round. At UFC Fight Night: Maia vs. Shields, Dillashaw fought and lost to Raphael Assuncao on 9-Oct-13 via a split Decision after 3 rounds of action.

On 15-Jan-14, he fought Mike Easton at UFC Fight Night: Rockhold vs. Philippou and won the match with a unanimous decision. T. J at UFC 173, fought against Renan Baro and won the match held on 24-May-14 via TKO (head kick and punches) in the 5th round.

On 17-Jan-16, he fought Dominick Cruz at UFC Fight Night: Dillashaw vs. Cruz but lost the close match in a splits decision after a 5 round fight. Dillashaw, then at UFC 200 fought against Raphael Assuncao, and won the match held on 9-Jul-16 via a Unanimous Decision. 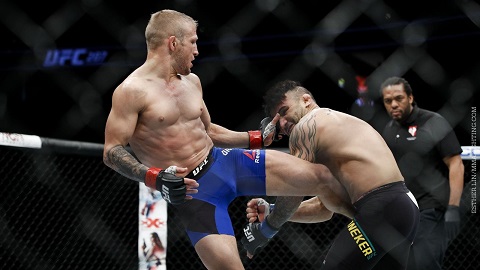 Respectively, on 30-Dec-16, he fought John Lineker at UFC 207and won in a Unanimous Decision victory. Correspondingly, he at UFC 217 fought against Cody Garbrandt and won the match held on 4-Nov-17 via KO (punches) in round 2, which went on to be the biggest feud in the bantamweight division.

In his Flyweight debut, for the UFC Flyweight Championship at UFC Fight Night: Cejudo vs. Dillashaw, he was defeated by opponent Henry Cejudo on January 19, 2019.

T.J after his success at bantamweight tried moving to flyweight and challenged the current champion Henry Cejudo at 115 lbs in a losing match in UFC Fight Night 143 on 20th, January 2019 after UFC signed an official deal with the ESPN. Cejudo won Dillashaw via a TKO in early round one in 32 seconds.

On 20th March, USADA pressed charges on T.J Dillashaw for the use of performance booster drug. So, TJ recently is dealing with a controversy related to a performance enhancement drug related issue with USADA. The champ following the charges reportedly is out of the sports for a year's span and will not be able to return to the UFC till 2020.

As per TJ, it was his decision to vacate the Bantamweight title following the result of a positive anabolic steroid-related case where as MMA reporters including Ariel Helwani have claimed that it was NYSAC and USADA who took the necessary actions over T.J's unprofessional move.

TJ Dillashaw has been suspended for a year by the NYSAC, according to sources. A formal announcement is expected to be made this AM. Unclear at this time if he will be suspended longer by USADA but this is a NYSAC and USADA issue. Also unclear what he failed for. Developing.

It is anticipated that T.J's sample taken before the fight with Henry is positive but what was the substance he took in, is still unaddressed.