Gossip Steve Sarkisian Signs a Contract with Texas; What is his Annual Salary? Details about his Net worth, Divorce Settlement, Wife, and Children

Steve Sarkisian Signs a Contract with Texas; What is his Annual Salary? Details about his Net worth, Divorce Settlement, Wife, and Children

Over two decades in the coaching field has earned Steve Sarkisian a tremendous net worth. Other than his career, the personal matter has brought the football coach to the media as well. Scroll down to know Sarkisian's career, net worth, salary, married, wife, children, and divorce.

Steve Sarkisian's Net Worth In 2021

As of 2021, Steve Sarkisian's net worth is approximately $5 million. Not to mention, the significant source of his earning is his coaching career.

Aforementioned, the University of Texas and Sarkisian have recently agreed on a six-year, $34.2 million contract,  with a starting salary of $5.2 million for 2021 with $200,000 increases every year thereafter.

A player turned coach, Sarkisian finished his collegiate career as a quarterback at Brigham Young University (BYU) and professionally played with the Saskatchewan Roughriders of the Canadian Football League (CFL). According to the source, CFL players earn an average base salary of between $80,000 and $85,000.

Regarding his real estate portfolio, Steve Sarkisian has listed his 8,250-square-foot home in Rolling Hills for sale at $9.5 million back in 2015. Also, he had a house at Yarrow Point, Washington where he lived during his stint with the University of Washington. He sold the mansion for $3.5 million in 2014.

Eighteen Years Of Marriage Came To An End Suddenly

Steve Sarkisian and Stephanie Sarkisian tied the knot in 1997, in a secret ceremony. The duo was a high school sweetheart and dated until they graduated. Unlike other wags, Stephanie has maintained her personal life as secret as possible, however, she appeared sometime in the media alongside her husband. 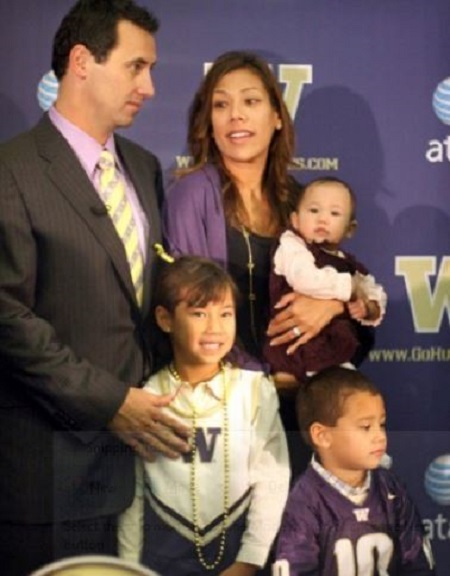 The Sarkisian shared three children together: Taylor, Ashley, and Brady.

Unlike other celebrities, Sarkisian got a little lucky when it came to his divorce settlement. His ex-wife did not ask for the hefty amount / spousal support, instead, they came to an agreement to raise their children jointly.

They said, "It is our desire to protect the privacy of our children and each other. Our goal is to raise our children in a joint, cooperative style as caring and loving parents. Thank you for respecting our family's privacy. We will have no further comment."

Stephanie filed for divorce on 20th April 2015, citing irreconcilable differences. The divorce was finalized in 2016.