Steve Sarkisian is a popular American football coach and former player who was recently hired by the University of Texas at Austin as their head coach. Earlier, he served as the offensive coordinator for Alabama Crimson Tide. He also was the offensive coordinator of the Atlanta Falcons of the National Football League. From 2009 to 2013, he worked as the head football coach at the University of Washington. Sarkisian was fired by the Falcons in late December 2018.

Steve Sarkisian was married to Stephanie Sarkisian since 1997 but the couple got a divorce in 2015. The former couple together has three children. He has an estimated net worth of $3 million in 2020.

Steve Sarkisian Salary and Net worth

Steve Sarkisian was paid a salary of $4,250,000 in 2018. He is currently as offensive coordinator for Alabama Crimson Tide which has the highest-paid coaching staff in American college football. Sarkisian earns $1,550,000 as a base salary and is the 7th best-paid college football assistant. He will earn $133,000 maximum from the bonus. He works under head coach Nick Saban who is the second-highest-paid coach behind Clemson’s Dabo Swinney.

His current estimated net worth is reported to be around $5 million as of 2021.

In 2009, he used to earn $1.75 million in Washington which increased to $2.3 million in 2013. He signed a contract extension with the team and was paid $2.85 million as an annual salary in 2018. He also had a contract with USC which was terminated due to his leave of absence. He later filed a $30 million lawsuit but lost it.

Steve Sarkisian Personal Profile; Who is he Married to?

Steve Sarkisian married his longtime girlfriend Stephanie Sarkisian in 1997 after having a long affair. They were in an affair for four years before being a husband and wife. Unfortunately, their marriage did not sustain long. 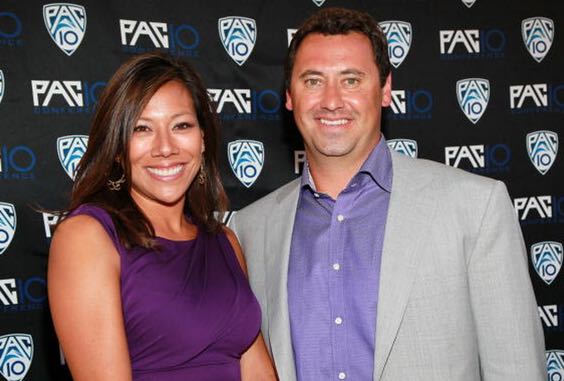 They separated after 18 years of their marriage in the year 2015. Together they have three children; two daughters and a son named Taylor Sarkisian, Ashley Sarkisian, and Brady Sarkisian. Currently, he is single. He is not dating anyone. 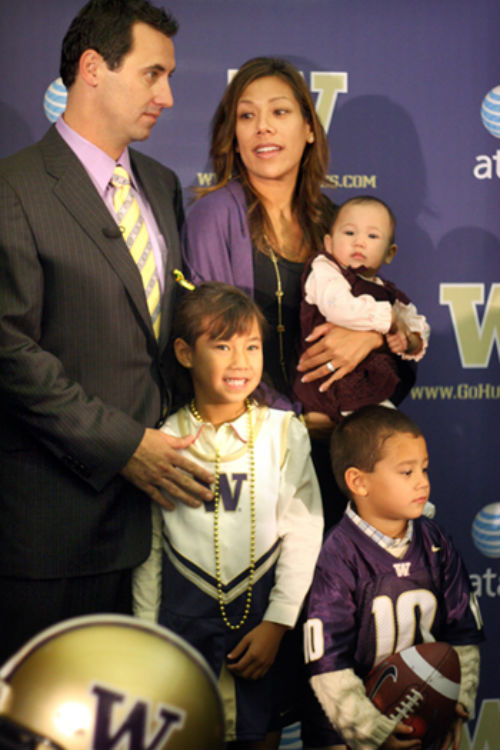 He was on several controversies due to his alcohol drinking issues.

Steve Sarkisian is widely admired for his professional accomplishments. He has a great personality. He has a perfect height of 6’2”, which is around 1.88m. He is famous on social networking sites.

Steve Sarkisian born as Stephen Ambrose “Steve” Sarkisian on 8 March 1974 in Torrance, California. Regarding his nationality, he is an American and belongs to white ethnicity. His star sign is Pisces.

Steve Sarkisian was raised in Torrance, California. He grew up along with his six older siblings. His ancestry is part Irish-Armenian and Iranian. His father was born and raised in Tehran, Iran before permanently shifting to the United States. Steve Sarkisian's mother is an Irish-American from Massachusetts.

Steve Sarkisian Career as a Player and Football Coach

Steve Sarkisian played college football as a quarterback at Brigham Young University as well as with the Saskatchewan Roughriders of the Canadian Football League. Steve Sarkisian's coaching career started in 2000 when he back to EI Camino College as its quarterback coach. In the same season, he was hired as USC’s offensive coordinator by new head coach Pete Carroll.

In 2009, he agreed to a 5-year contract with the University of Washington. He served as a head football coach for four years. In Sep 2016, he was hired as the analyst Alabama football team.

On Feb 7, 2017, he was hired as the Offensive Coordinator for the Atlanta Falcons. He replaced Kyle Shanahan. However, Sarkisian was fired after a 7-9 season in December 2018. He then joined Alabama as a offensive coordinator and worked under Nick Saban. Recently in 2021, he was hired by the University of Texas at Austin as their head coach.