Kyle Michael Shanahan a.k.a. Kyle Shanahan is an American football coach who currently stands as the head coach of the San Francisco 49ers of the National Football League (NFL), a position he held since 2017, replacing Chip Kelly. Earlier, he served as a offensive coordinator for Atlanta Falcons, Cleveland Browns, Washington Redskins, and Houston Texans.

Minneapolis, Minnesota native, Kyle Shanahan was born on 14th December 1979, under the star sign Sagittarius. The forty years old is an American by nationality and is of white ethnic background.

How Much Is Kyle Shanahan Net Worth In 2020?

San Francisco 49ers nailed down head coach Kyle Shanahan to a six-year contract extension that will see him remain at the NFL franchise until 2025. According to ESPN’s Adam Schefter, this new contract worth $21 million makes him one of the NFL’s five highest-paid head coaches. The highest-paid NFL coaches are Bill Belichick, Pete Carroll, and Jon Gruden.

As per the contract, his base salary is $3.5 million per annum. Furthermore, his contract contains milestone bonuses that could result in several million more dollars over the life of the deal. As of 2020, his net worth is approximately $5 million.

Kyle Shanahan is married to his high-school lover, Amanda "Mandy" O'Donnell, who has been through some extreme highs and lows watching her husband coach in primetime. The couple tied the knot on 5th July 2005 in a Roman Catholic ceremony. The couple shares three children: Carter, Stella, and Lexi. 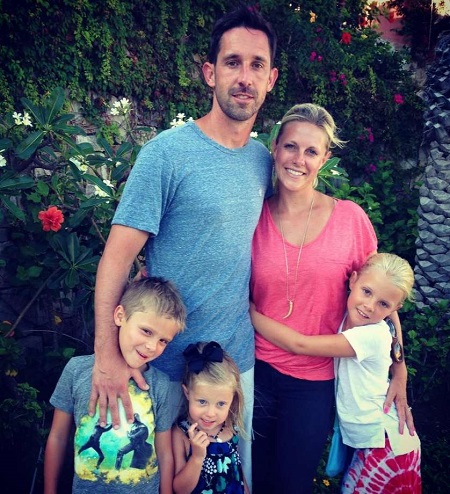 To date, there is no news and rumors of conflict, extra-marital affairs, and divorce in their 15 years of marital life. The couple is living a blissful life.

Kyle is the son of Mike Shanahan, a retired American football coach who is well recognized as the head coach of the Denver Broncos of the NFA from 1995-2008. His mother, Peggy Shanahan is a home-maker. Further, Kyle grew up alongside his sister, Krystal.

Kyle enrolled at Cherry Creek High School and later accepted a scholarship offer by Carl Franks of Duke University, but chose to transfer as a redshirt freshman to the University of Texas at Austin, where he played wide receiver.

Kyle Shanahan started his career as a graduate assistant at UCLA in 2003. The following year, he was hired by the Tampa Bay Buccaneers as an offensive quality control coach. In 2006, he joined the Houston Texans as a wide receiver coach. later, he switched to quarterback coach and then to offensive coordinator.

From 2010 to 2013, he served as a offensive coordinator to Washington Redskins. Further, he had the same roles at Cleveland Browns (2014) and Atlanta Falcons (2015-2016). In 2017, he became the head coach of the San Francisco 49ers. In his third season with the team, Shanahan led the 49ers to a Super Bowl appearance in Super Bowl LIV.