Born as Stanislas Wawrinka, Stan Wawrinka is a famous Swiss tennis player currently ranking at No 19 on the ATP World Tour. The Swiss international, reached his career-high on 27 January 2014 taking the world number 3 ranking. Wawrinka is often characterized as a powerful offensive baseliner capable of playing well on most surfaces.

Popular as Stan, Wawrinka has won 3 Grand Slams in his career that includes the 2014 Australian Open, 2015 French Open, and 2016 US Open. Furthermore, he has an estimated net worth of $16 million.

He is considered to be one of the highest-earning tennis stars with the of $4.4 million earning including his prize money of $133,566 in 2018.

Happy to announce to my fans that I will play next week in Geneva!!! #audemarspiguet #evian #lcg #yonex #tgvlyria #jetcraft

In 2014, he struck a four-year $20 million deal with sports equipment manufacturer Yonex. Further, advertising various sportswear like Nike, his endorsement deals generate him a wealthy worth of $3.6 million. He also endorses different Racquet Brands like Wilson, Volki, and Gamma which adds up to his income.

Furthermore, he owns a lavish mansion in Coppet, Switzerland (CH).

As of now, Stan is probably single and unmarried. Previously, Wawrinka lived in Saint-Barthelemy, about 20 km north of Lausanne with his wife Ilham Vuilloud in 2009. His former wife, Ilham Vuilloud is a Swiss television presenter and a former fashion model.

The couple got married on 15 December 2009, among their friend and family and eventually, their relationship ended after spending 10 years of their life together. The pair welcomed their firstborn daughter named Alexia on 15 December 2010. 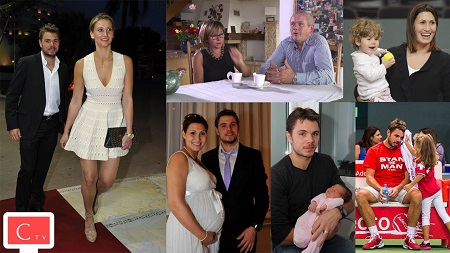 According to the reports of Swiss media, Wawrinka separated from the family after a year of his daughter’s birth. The couple later made terms with each other which did not resolve their relationship. On 9 April 2015, Wawrinka posted a statement on his Facebook page announcing their divorce.

His wife later went on social media saying that she was not responsible for his poor tennis results as some of his fans suggested.

After that, Wawrinka started dating Donna Vekic a Croatian tennis player who is compared to future Maria Sharapova. The relationship between the two is rumored to have been going on since the tennis pro was dealing with his divorce procedure with his then-wife Ilham Vuilloud. 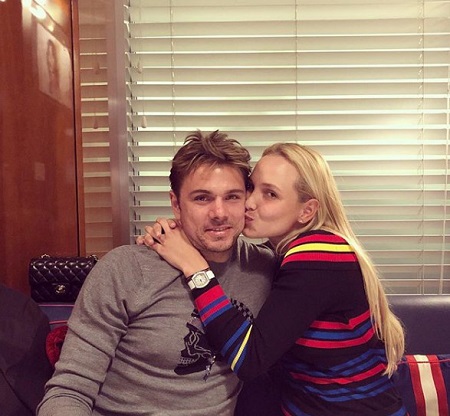 However, the couple broke up. In a recent interview, Wawrinka didn’t want to comment on the rumored split, but he stated: "I won three Grand Slam titles and more tournaments than I hoped to. So, during my career, I had to do more than just caring about my private life."

Stanislas Wawrinka was born in Switzerland on March 28, 1985, to a German father and Swiss mother. He holds dual citizenship both Swiss and German. Coming from Czech ancestry, his father Wolfram Wawrinka was a farmer and social worker and his mother Isabelle Wawrinka, an educator.

Wawrinka grew up with his elder brother, Jonathan and his two younger sisters, Djanaée and Naélla, all of them are a tennis player in their own rights. He attended the Rudolf Steiner School in Crissier. Switzerland.

In 2002 Wawrinka became professional and in 2003 he took his first steps on the tour and ended by winning Junior French Open and a number 7 rank in the junior world ranking.

He reached his first ATP final in his debut match at the French Open in 2005 and then following year Wawrinka went on to win his first ATP title as his final opponent Novak Djokovic retired through fatigue.

When Stan, reached to the finals of 2008 Master Series event in Rome, he entered the top 10 rankings for the first time but was beaten by Novack Djokovic in the final. The same year in the Olympics, Stan teamed with Roger Federer in men’s double and won the gold medal for the country, defeating Simon Aspelin and Thomas Johansson from Sweden.

Wawrinka had lost to Rafael Nadal in the fourth round of Miami Masters 2009 and the same year at the Monte-Carlo Masters, he defeated his fellow country sportsman Roger Federer for the first time in straight sets.

In the summer of 2012 Summer Olympics, Stan lost to the gold medalist Andy Murray and had a series of first-round exits at Wimbledon. At US Open he reached the fourth round but had to retire due to his illness.

His ninth season on the 2014 ATP World Tour came with a win at the Chennai Open in India. Then at the Australian Open, Stan beat Djokovic in the quarterfinal in the fifth set which ended a 14 match losing streak against him and faced world number 1 Rafael Nadal in four sets which also marks his first win over Nadal.

The year 2015, Wawrinka winning the French Open and 3 other ATP titles, following 2016 with a defeat against Roger Federer for the fifth time in straight sets.

In 2017 campaign, Stan chose not to defend his Chennai Title which he had won for previous 3 editions. He made his comeback at 2018 Australian Open and lost in the second round and later retired because of his knee injury.

Wawrinka was seeded 24th at the French Open. He won his first two matches over Jozef Kovalík and Cristian Garín prior to defeating Grigor Dimitrov for the third time in the last four majors. Then, he beat Stefanos Tsitsipas in the fourth in an 'epic' five-setter to advance to his first Grand Slam quarterfinal in two years. However, he was defeated by Roger Federer, the third seed, in four close sets.