Stacey Orlando Augmon commonly known as Stacey Augmon is a Former Basketball player and current coach. He played professionally in the National Basketball Association (NBA) and now he is serving as a player development coach of the Sacramento Kings.  He was also an assistant coach at his alma mater UNLV under coach Dave Rice.

In addition, he also worked as the head coach for the Jeonju KCC Egis of the Korean Basketball League and he played as a number 2 player.

Is Stacey Augmon married or in a relationship?

Yes, Stacey Augmon is a married man and he was married to Leslye Augmon. They both look happy together and live happily with their children. They both had 7 children together and their names are Obery Power, Tressje Power, Joanie Augmon, Zion Augmon, Freedom Augmon, Justice Augmon, and Deja Augmon. 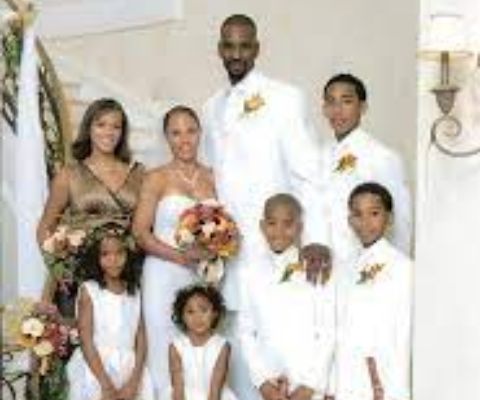 Stacey Augmon with his wife and children. SOURCE: Myspace.com

Furthermore, he is living happily with his wife and his children.

Similarly, he has 78 posts on Instagram which include most games images, some are daily activities, and some are with friends as well as he has 1164 tweets on Twitter.

Net worth, Salary, and Contract of Stacey Augmon

On the other hand, he is currently working as an assistant coach and one of his major earnings comes from coaching.

Former NBA player Stacey Augmon was born on August 1, 1968 (age 53) in Pasadena California and he grew up in California. He has completed his high school study at John Muir High School and he has completed his college-level study at UNLV. There is no information about his parents and he was married to Leslye Augmon. They both have 7 children together and they are living happily with their children. Furthermore, he is 6 feet 8 inches tall and his weight is 97 kg. According to the astrologist, his zodiac sign is Leo and he is black.

Stacey Augmon brings over 30 years of basketball experience at the professional and collegiate levels as both a player and coach. Augmon, a Pasadena, Calif. native, most recently served as the head coach for Jeonju KCC Egis of the Korean Basketball League during the 2018-19 season leading the team to the KBL Semi-Finals and a 32-30 record.