Spencer Tillman is a famous sportscaster working for Fox Sports and is currently hosting KTRK's Houston Texans Inside the Game on Sundays at 10:30 PM edition with Greg Bailey. Spencer also worked with CBS Sports, KPRC-TV. Besides, he is also a former football player and played for teams including Houston Oilers, San Francisco 49ers.

The resident of Sugar Land, Texas, Spencer Tillman is reportedly earning around $100,000, as his yearly salary from the network. As of 2019, Spencer reportedly has an estimated net worth of over $3 million. Tillmann is married to his longtime girlfriend Rita and has four daughters Alisa, Blair, Mir, and Bailey.

Spencer Tillman Net worth and Salary; What are his Sources of Earnings?

The American sportscaster and former NFL player Spencer Tillman have an estimated net worth of $3 million.  As of 2019, he receives an annual salary of $100,000 from his successful reporting career with Fox Sports.

Further, Fox Sports reporter receives an added sum of money from his radio and TV guest appearances as a sports pundit too.

Spencer Tillman is one of the most popular sportscasters of Fox Sports who has made a successful career as a sportscaster. Besides his broadcasting career, he also earned a quite good amount of money from his NFL playing career.

Spencer Tillman Personal Life; Who is his Wife?

Spencer Tillman is married to his girlfriend Rita on 1986, November 17. The couple is blessed with four beautiful daughters Alisa, Blair, Mir, and Bailey. Spencer is living a happy married life with his wife since there are no controversies about their relationship disputes.

George H.W. Bush, his wife Barbara, Rita and I at the White House. He told me to "Save 37% of whatever you make and never take a picture with a drink in your hand". I asked "what if it's milk" He shot back, "They'll say its eggnog". A fine man and underrated one-term potus. pic.twitter.com/XXOGiPJaOM

The detailed information regarding the marriage date and about the wife of Spencer is not available on media.

Besides a player and sportscaster, he is also a motivational speaker, author, and businessman. Currently, the Tillman family is living in Sugar Land, Texas, where they have a beautiful house.

Spencer Tillman was born on April 21, 1964, in Tulsa, Oklahoma. He is of American nationality and belongs to a Mixed ethnic group.

Spencer started playing football from his high school days but he began playing professionally after being drafted in the 1987 NFL Draft by Houston Oilers. After playing two seasons with the Oilers he was traded to the San Francisco 49ers.

Tillman played for three seasons with San Francisco and also served as a co-caption with Joe Montana and Ronnie Lott at Superbowl XXIV AND he ended his playing career in 1994. 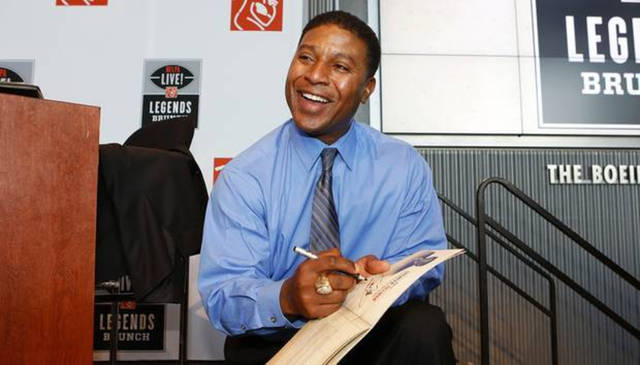 Tillman entered a broadcasting career working for KPRC-TV as their anchor and reporter. Later he started working for CBS Sports serving as their lead studio analyst on College Football Today.

He worked alongside Tim Brando covering several events including regional NFL games for CBS Sports. Other than working for CBS Sports, he also worked for FOX Sports and is currently hosting the KTRK's Houston Texans Inside the Game.

Tillman and Brando join the reporter Holly Sonders in 2018 for a full schedule of football college games on FOX and FS1.