Simon Kjaer is a professional football player who plays as a center back for the Italian club Milan and Denmark National Football Team and is also captain of the national team.

Simon Kjaer of Danish nationality was born to his mother, Lotte Kjaer, and his father, Jorn Kjaer on 26 March 1989 in Horsens, Denmark.

He began his playing career by joining the local Danish club, Lund IF before moving to the youth team of  FC Midtjylland.

Simon Kjaer’s Net worth and Salary

His earnings combined with an endorsement for famous brands like Nike is the region of $ 15 million and might have a net worth of around $10 million.

The current market value of Simon Kajer is estimated to be $19 million.

After his impressive start for the youth team of FC Midtjylland, he joined the main team and made his debut for the club against AGF on 30 September 2007.

During his time with the Danish Superliga club, his performances attracted top English Premier sides like Middlesbrough and Chelsea.

However, he signed with the Italian football club, Palermo in February 2008 for a reported transfer fee of $ 13.93 million from  Midtjylland.

He made his debut for the Italian club against Fiorentina coming as a substitute on 26 October 2008 and scored his first goal for the team against Chievo on 2 November 2008.

His impressive showing for Palermo made him a regular starter and main defender for the club. During this time, he won the Danish Talent year beating the likes of fellow Danish Teammate, Nicklas Bendtner and Christian Eriksen for the year 2009, and also won Danish footballer of the year 2009 in January 2010.

After a successful stint with an Italian team, he signed with German Bundesliga  VfL Wolfsburg in July 2010 for an estimated transfer fee of $ 12.32 million with an annual salary in the region of $ 3.70 million

He made his debut for the German club in a Bundesliga match against Bayern Munich in 2010 and scored his first goal for the German team in a winning effort against VfB Stuttgart.

Kjaer transferred to Italian Serie A club, AS Roma from Wolfsburg for 2011/12 season.

After his stint with the German club, he signed a four-year contract deal with the French Ligue 1 team, Lille during the summer of 2013 and scored his first goal for the French club against Lorient.

The Danish international signed a four-year contract deal with the Turkish club, Fenerbahce for $ 9.43 million in July of 2015.

He is currently playing for the Spanish club, Sevilla whom the star defender signed a four-year contract on 2 August 2017. He was loaned to Atalanta in 2019 and again loaned to AC Milan for 2020. He permanently signed with Milan later in 2020.

Simon Kjaer represented Denmark in Denmark's U -18, U-19, and U-21 teams and won the Danish U-19 player of the year in 2007. After his success, it was inevitable that he would be called for Denmark's senior squad and was eventually called up in February 2009 for the national team.

He along with fellow defender William Kvist was part of the Danish squad that took part in the 2010 FIFA World Cup in Brazil where Denmark was eliminated from the first stage.

Kjaer was the captain of the Denmark National Football Team that successfully qualified for the 2018 FIFA World Cup. He is also captaining his national team in the Euro Cup 2020.

Who is Simon Kjaer’s Wife?

Currently 32, Simon Kjaer married the love of his life, Elina Gollert, a Swedish woman whom he tied his knot in the summer of 2017 in Rome. The couple got married in a huge ceremony held in Rona, Italy in June 2017. 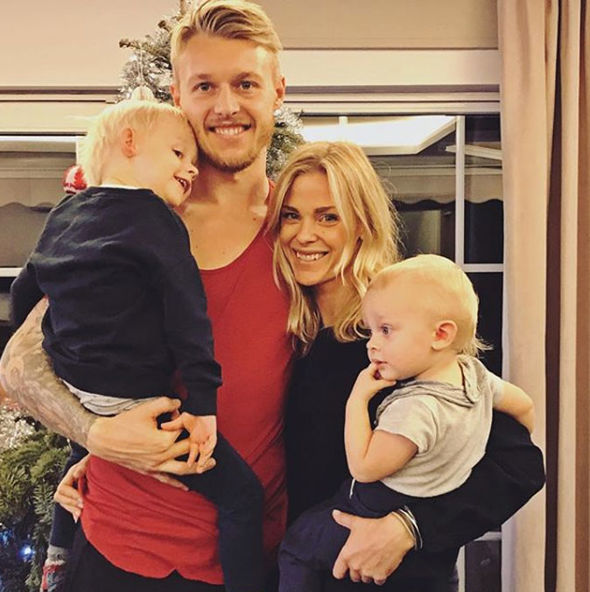 Simon Kjaer with his wife and children SOURCE: Daily Express

The couple was the parents of two boys before their marriage. The name of their first child is Milas Kjaer and had their second child in November 2015.