“Shaun Livingston” whose full name is Shaun Patrick Livingston is an American professional basketball player for the Golden State Warriors of the National Basketball Association. He has proved himself one of the successful players in the NBA. He began his professional career with Los Angeles Clippers and currently,  plays for the Golden State Warriors.

Net Worth and Endorsements of Shaun Livingston

Shaun Livingstone is indeed a wealthy man who has an estimated net worth of $20 million in 2019, including all of his properties and earnings. Further, his total NBA career earning is $57,164,535.

His salary has boosted his net worth this year.

The Car collection of Shaun Livingston is not quite large but is luxurious indeed. Earlier he had a BMW and a Range Rover. Recently, he is often seen riding the blue lavish Ferrari. The value of the Cars around $1.6 Million. As for his living, he lives in a house worthing around $2 million which is located in Los Angeles, California. He Bought this House in 2011.

Personal Life of Shaun Livingston; Is he Married?

He is a married man, he got married to his loving sweetheart, Joanna Williams, the founder of a photography studio in Las Vegas that specializes in headshots and portraits. She too is a model, creative director at TAO and the co-owner and co-founder of The ChungMarie Group. 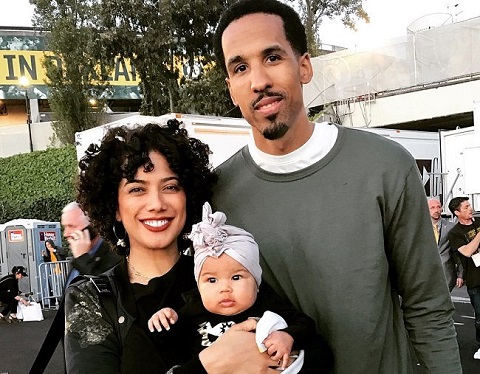 The couple tied their knots on 7 August 2017, among their family and friends in a  ceremony held at Illinois. The couple welcomed their first child daughter,  Tyler Marie on 13 January 2017. Livingston is living a blissful life together with his wife without any news of divorce and conflicts.

Shaun Livingston was born as Shaun Patrick Livingston on September 11, 1985, to American parents, Reggie Livingston and Ann Wyman. He was born and raised in, Illinois, the United States. Talking about his nationality, as he is an American and is of Afro-American ethnicity. His birth sign is Virgo. He attended Concordia Lutheran Grade School and graduated from the Peoria Central High School.

Shawn Livingstone invested his two years of basketball career at Richwood High School. Later he transferred to Peoria Central High School and played in the 2004 McDonald’s High School All-American game and was named co-MVP of the game.

In the Year 2004, he was listed as the NO.1 point guard and the NO.2 player in the nation. After his high school, he committed to play for Duke, but he moved to the NBA straight out of his school.

He has started his professional career with the Los Angeles Clippers and his professional stats is quite impressive. He played with Clippers from 2004 to 2008. Unfortunately, he suffered from an injury in the Year 2007 in a game against the Charlotte Bobcats. On June 2008, he back in his game.

He also played for Brooklyn Nets from 2013 to 2014. On July 11, 2014, he went to play with Golden State Warriors to a three-year, $16 million contract. His career highlights and awards are worth to watch for the youngsters.