Klay Thompson is an American professional basketball player for the Golden State Warriors of National Basketball Association (NBA). He played basketball for three seasons at Washington State University. He was selected in the first round of the 2011 NBA draft by the Golden State.

In 2014 he and his teammate Stephan Curry set the then-record with 484 combined three-pointers and got a nickname the ‘Splash Brothers’. In 2015, he led Warriors to their first NBA Championship since 1975. Klay is a four-time NBA All-Star and two time All-NBA Third Team honoree.

Klay Thompson has an estimated net worth $38 million as of 2019, mostly earned through his NBA career. Not to mention, Thompson is one of the leading players of the Golden State Warriors in the NBA since he joined the Warriors in 2011 season. Thompson signed a four-year contract worth $68 million in 2015 with the Golden States.

The Warriors' shooting guard bought a house in Dana Point for $2.2 million back in 2015. He is often seen riding his Chevrolet car.

In late October 2017, Thompson participated in local efforts to raise money for the October 2017 Northern California wildfires. Thompson was able to raise $5,223 per point scored with 69 points in the three games.

Besides, Kalay earns much from his endorsement deals. His deals include BodyArmor, Anta Sports Products, BMW Group, Electronic Arts and Fanatics.

Furthermore, Klay’s endorsement earnings are $13 million including his shoe deal and his chocolate milk deal. He recently signed an extension with the shoe company and is expected to earn around $9 million annually.

As of now, Klay Thompson is in a romantic relationship with his girlfriend, Laura Harrier. Although he was previously in a relationship with many beautiful ladies, he finally seems to have found love of his life. As per the reports, the couple has been dating for six months but the duo is yet to decide to take their relationship to the next level, i.e. to get married. 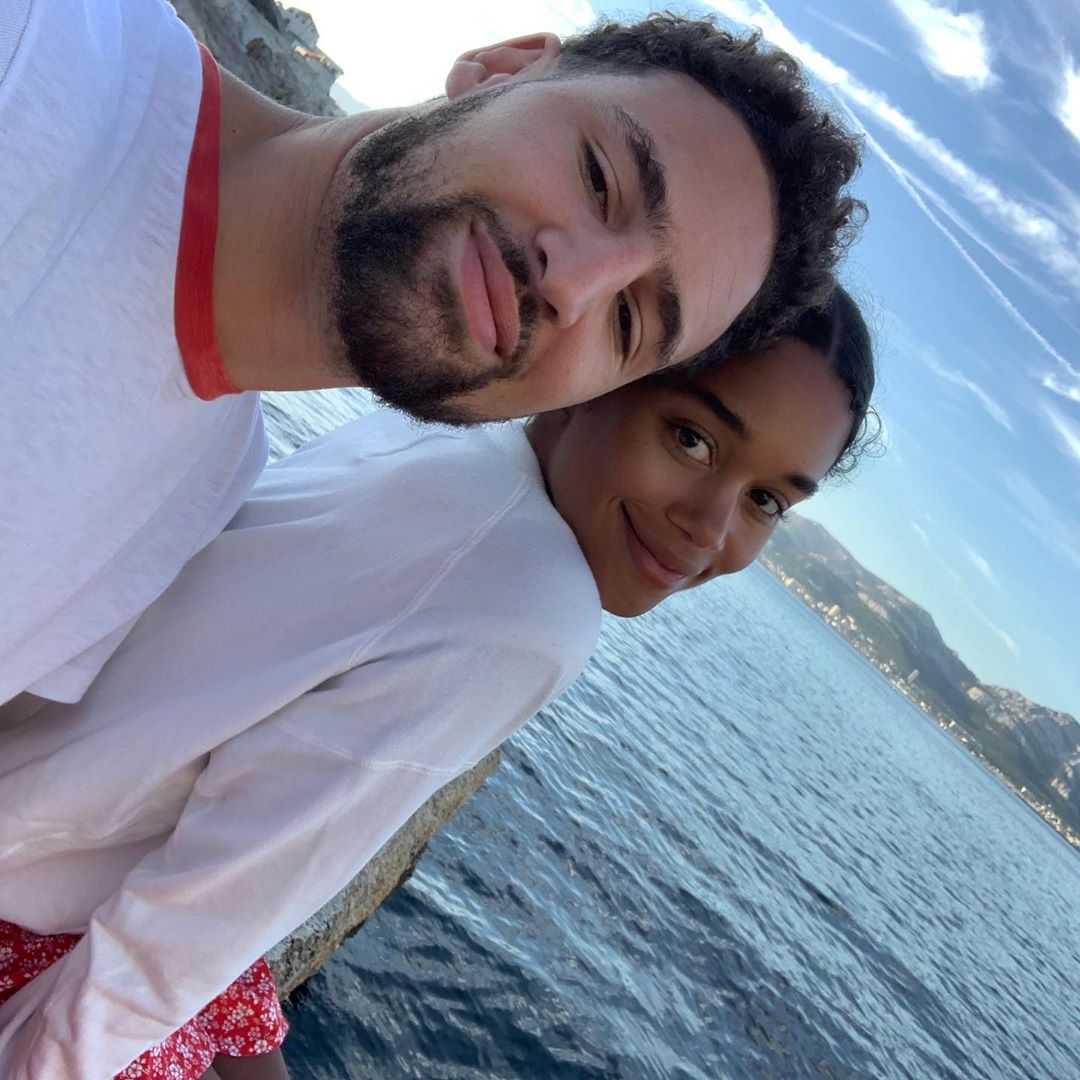 Exploring his social account, Klay seems to be in deep love with his current partner. Additionally, the couple often spends some romantic time together and most recently, they were spotted at Anse de Maldormé, France, enjoying their vacation. 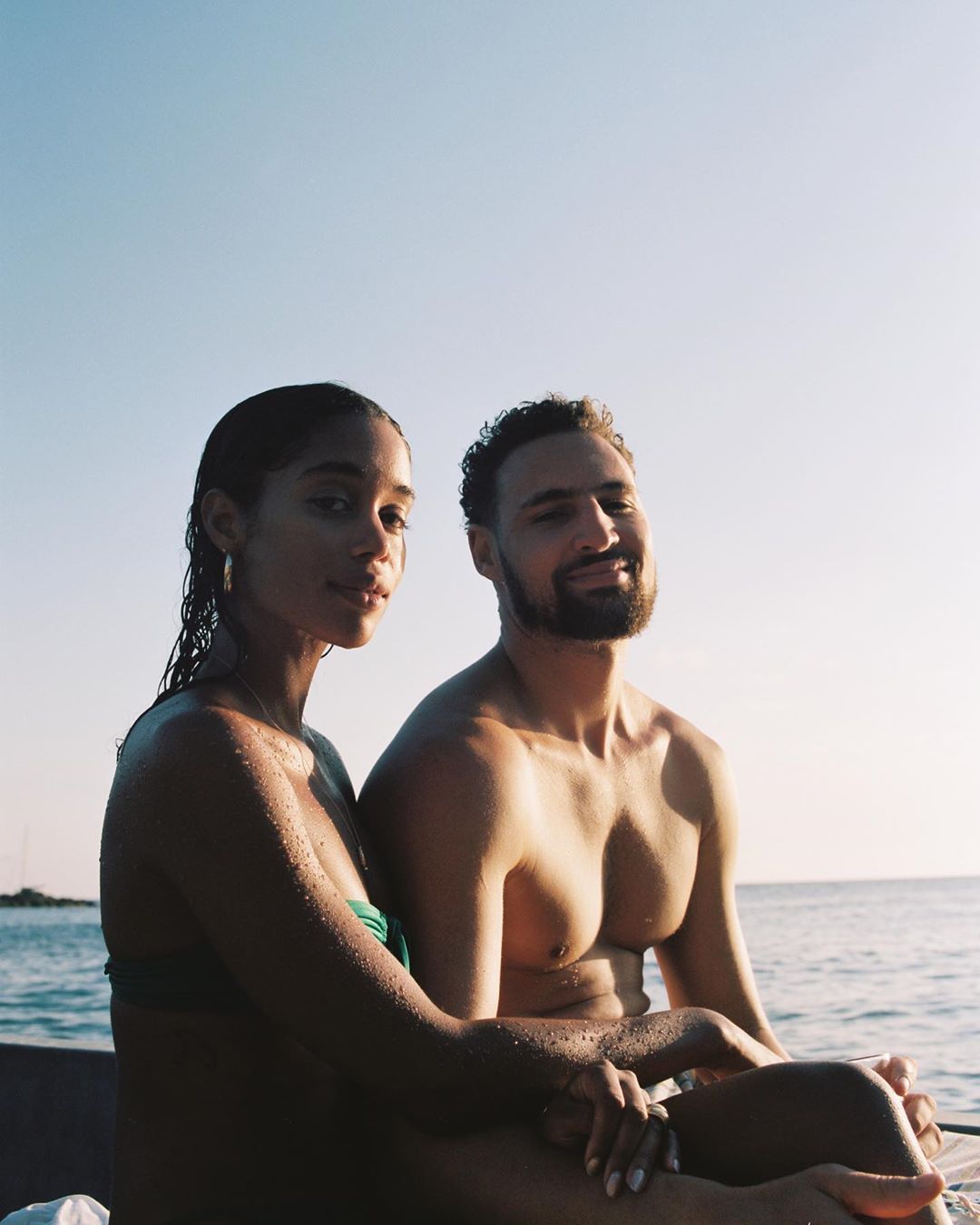 Klay Thompson with his girlfriend enjoying their vacation
SOURCE: Instagram

His girlfriend Laura is an American actress and model who is famous for her work in Spider-Man: Homecoming. Additionally, she is also well-known for different movies and series like One Life to Live, Unforgettable, The Last Five Years, Fahrenheit 451 and many more. Additionally, she also worked as a model for companies such as Garnier, Urban Outfitters, American Eagle, and L'Oréa.

Klay has dated many beautiful ladies: a model and television personality Hannah Stocking, Los Angeles cheerleader Cherise Sandra, Fordham basketball player Tiffany Suarez. Cherisa was rumored to be in a relationship with him in 2016. But, Klay later denied the rumors. Tiffany and Klay were close to each other in 2017 but was proved to be false.

Thompson was in relation with Hannah Stocking for almost a year and the duo parted their ways when Stocking found him cheating on her. The couple started dating each other in 2014 but broke up a year later on October 2015. 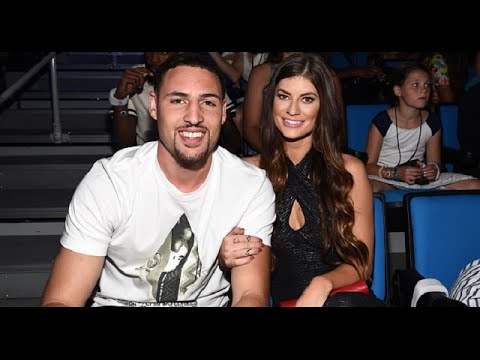 The reason behind their separation is cheating allegations. Hannah tweeted writing: "When you catch ur man naked in bed with a groupie … lol, @KlayThompson. I told him I’d @ him if he kept harassing me…So I guess he really wanted that tag to get his number up." Klay might have cheated her and slept with the next girl which ended their one year romance.

Klay Thompson was born on February 8, 1990, to Julie and Mychal Thompson the former NBA player.  Thompson moved to Lake Oswego, Oregon at the age 2 where he was friends with Kevin Love future NBA star. When he was 14 his family moved to Ladera Ranch, California.

My inaugural insta post has to go to the people I love most. Without these 4 I would not be able to do what I love. I love my family!

Thompson was born and raised in Los Angeles, California. His older brother, Mychel played basketball for Pepperdine University and has played in the NBA Development League, while his younger brother, Trayce is a Major League Baseball player with Oakland Athletics.

Thompson started all 33 games at Washington State University he was named to the Pac-10 All-Freshman Team and All-Freshman Honorable Mention Team after leading his team in 3-point field goal percentage averaging 12.5 points per game.

He leads the Cougars to the Great Alaska Shootout Championship, where he was named Most Outstanding  Player after he scored a tournament single-game record of 42 points.

Thompson was named to the All-Pac-10 First  Team after he became the third-fastest Cougar to reach 1,000 points. He was also chosen as a midseason candidate for the John R. Wooden Award.

As a junior, Thompson became the first Cougar to win Pac-10 Player of the Week three times. In 2011 Pac-10 Tournament, Thompson set records with 43 points and 8 three-pointers. He is WSU’s 3rd all-time leading scorer.

Thompson was selected 11th overall by the Golden State Warriors. The NBA did not select Thompson for the 2012 NBA All-Star Weekend Rising Stars Challenge.

On May 8, 2013, Thompson set a playoff record with 34 points against San Antonio, along with a career-high 14 rebounds.

Thompson scored a season-high 38 points in the opening game of 2013-14 season including 5-of-7 three-pointers. Thompson and the warriors entered the 2014 NBA playoffs as the sixth seed in the Western Conference.

Thompson signed a four-year contract extension with the warriors on October 31, 2014. On January 23, 2015, Thompson scored a career-high score with 52 points, with 11 three-pointers in a 126-101 win over the Sacramento Kings.

On June 7, game 2 of the NBA finals, Thompson scored a career-high 34 points in a game against Cavaliers. The Warriors defeated the Cavaliers in six games and won the NBA championship.

Thompson averaged 17.2 points per game at the beginning of the 2015-16 season. On December 12, The warriors NBA-record ended after 24 winds when they lost to the Milwaukee Bucks 108-95.

Thompson became the first player in NBA history to make at least seven three-pointers in playoff games. The Warriors went on to lose against Cleveland Cavaliers in the 2016 NBA finals. He also won the All-Star three-point contest defeating Stephen Curry and Devin Booker in the final round.

With a win over 129-115 in game 4 of the Western Conference Finals over the San Antonio Spurs, the warriors reached their NBA Final series. The Warriors won their second championship in three years with a 4-1 series win over the Cleveland Cavaliers in the 2017 NBA finals.

On October 29, 2017, Thompson became the 11th player in franchise history to eclipse 9,000 career points. On February 22, 2018, with a win over the Los Angeles Clippers, making Thompson the 10th warriors player to reach 10,000 career points in the regular season.

Don't miss: Golden State Warriors' Klay Thompson returns to the second quarter after leg injury at the Game 1 of the NBA finals

Thompson was also the vital member of the team in the 2019 season and helped the Warriors to lead the Western Conference table. He also played the playoff games against Los Angeles Clippers and Houston Rockets and helped the team to reach the Conference Finals that will be played against Portland Trail Blazers.