Shannon Elizabeth Woeller, simply known as Shannon Woeller, is a Canadian soccer player currently signed to Eskilstuna United in the Damallsvenskan. Earlier, she played for FF USV Jena (2017–2018), Stjarnan (2015), IK Grand Bodø (2014), Seattle Sounders (Seattle Sounders), and Vancouver Whitecaps FC (2008–2012). Also, she is in the Canada national team since 2009, having previously represented Canada U15 and Canada U20.

Vancouver, British Columbia native, Shannon Woeller, was born on January 31, 1990, under the star sign Aquarius. She holds a Canadain nationality and belongs to the white ethnic background.

Shannon Woeller Salary & Net Worth As Of 2020

Playing professionally since 2008, Shannon Woeller has earned a decent sum of money. As of 2020, her net worth is approximately $0.1 million.

Currently playing side Damallsvenskan side Eskilstuna United DFF ere, the average monthly salary is SEK 11,000 ($1125.64), which is yearly ($13507.68). Besides, her club career Woeller is assumed to have a considerable sum of money through the national side, Canada national team. 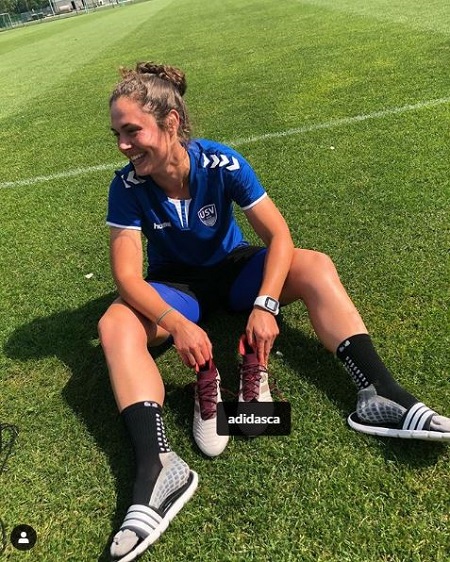 An Adidas athlete, her endorsement deal must be lucrative.

Eskilstuna United's defender No. 2 Shannon Woeller is a quite confidential person when it comes to her personal life. It seems the soccer player is much focused on her career rather than involving in a romantic relationship. Or she might be dating someone secretly and don't want to expose her private life in media.

Active on Instagram with 2,132 followers, her pictures on the page are from her games, vacations as well as with friends and family.

She grew up competing in soccer, basketball, baseball, cross country, and skiing. In her native city, Shannon played high school soccer for Prince of Wales Secondary School and then enrolled at Rutgers University, where she played from 2009 to 2013.

Though she missed the 2018 Concacaf Women's Championship through injury, she represented Canada at the FIFA Women's World Cup France 2019 alongside Kailen Sheridan and Allysha Chapman.