Kailen Sheridan is a Canadian soccer player currently signed to the NWSL side, the Sky Blue FC, and the Canadian national team. Sheridan, at the 2017 NWSL College Draft, was picked as the 23rd overall pick by Sky Blue FC.

Born on 16 July 1995, Kailen Sheridan is the Clemson University alumna. There she played for the college soccer team, the Clemson Tigers earning the All-ACC first team in 2014 and 2015.

Three years as a professional soccer player for the NWSL team has helped Kailen Sheridan to summon a tremendous sum of money. Reportedly, Sheridan's salary is a five-digit figure.

Who Is Her Girlfriend?

Kailen Sheridan has openly shared her sexuality, and she is a proud lesbian. Kailen Sheridan, along with other soccer players Jodie Taylor, Karen Bardsley, Stephanie Labbé, among others, were listed in 41 out gay and bi soccer stars in the Women's Wolrd cup 2019. 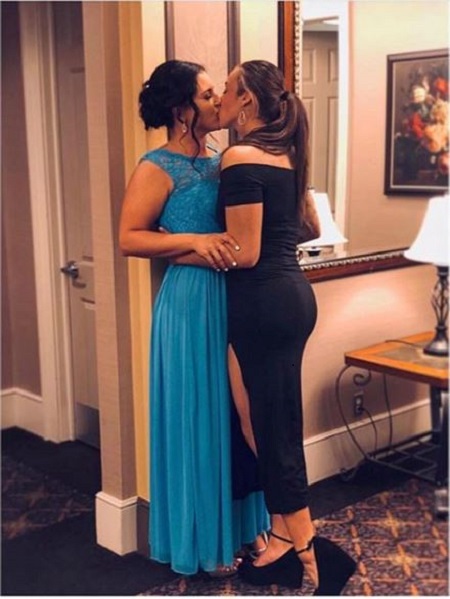 Currently, she is in a relationship with her girlfriend, Domini Cole. The couple started dating since January 2018.

Whitby, Ontario native, Sheridan, was born to Matthew and Angela Sherida. She holds an American nationality who came from a white ethnic background. She has a younger sister named Marina.

Getting into the Sport: Sheridan started playing soccer at the tender age of five. As a child, she was shy, so her parents signed her up to be more social; loved it as soon as she stepped on the field. Later, she grew up competing in soccer, basketball, volleyball, swimming, and triathlon.

Along with playing soccer for the Clemson University team, she has majored in Psychology.

Sheridan was picked as the 23rd overall pick by Sky Blue FC at the 2017 NWSL College Draft and was later named an allocated player by Canada Soccer.

In her debut season, she was named to the Team of the Month for May 2017 and recorded 19 saves during the month, helping Sky Blue to a 3–1–0 record. The following season, she starts and plays all but one of Sky Blue's games, where she led the league with 7.38 goals prevented per game. She started the 2019 season, winning back-to-back NWSL Saves of the Week in weeks 2 and 3.

Prior to joining Canada national team in 2016, she played for the Canada U17 and U20 teams.