Sebastian Rudy is present midfielder of German football giants FC Bayern Munich and Germany national football team. He has participated in under 18 level and won the Fifa Confederations Cup 2017 as a part of German national team.

Prior to joining Bayern Munich, he has represented Germany football clubs such as 1899 Hoffenheim, Vfg Stuggart, and Vfh Stuggart II.

Sebastian Rudy, a German national of white European ethnicity, was born to parents Claude and Nadja Rudy in Villingen-Schwenningen, Germany on February 28, 1990. He has a brother, Florian, who is also a professional player like him. Florian plays for SV Heimstetten as a striker.

The German midfielder, as of 2018 has earned a lot of money through his contract deal with cash-rich, and endorsement with sports brands like Nike, the same brand endorsed with famous German players like Jerome Boateng, Miroslav Klose, Mario Gotze. He currently uses Nike Tiempo Legend 7, which cost around $192  (approx €154)

The Bayern Munich Midfielder also has a  passion for cars as he owns an Audi and several sports car.

Sebastian Rudy started his playing career for FC Dietingen in their junior level. During 2003, he was involved with Vfg Stuttgart Academy for Youth.

Rudy began his club career at senior level with Vfg Stuttgart II in 2007 against Union Berlin. In 2008, he signed with VfB Stuttgart initial team against German Club, Hansa Luneburg.

He started playing for German national side in their under 18 levels. His first appearance for the senior national side was against Poland in a friendly match in 2014.

He scored his first international goal against North Ireland during 2018 FIFA World Cup Qualification. He is an integral part of German national team as he along with several players will play a crucial role in 2018 Fifa World Cup Russia as Germany is preparing to defend its title.

His major awards and title that he won as a part of the team and as an individual :

He married his girlfriend Elena Rudy and together they live in Munich, Germany. 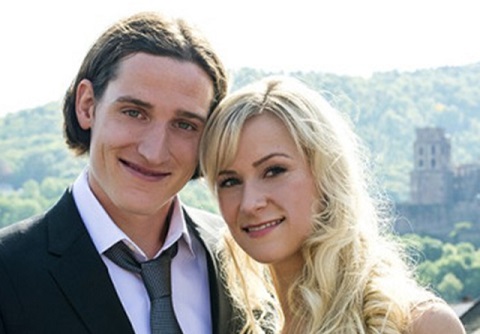 The couple got married in Rottweil with inviting selected 100 guests.  Most of the guests were  German profession football players like Oliver Baumann, Jannik Vestergaard, and Andreas Beck.  Currently, the couple is expecting a baby, is going to born this summer.