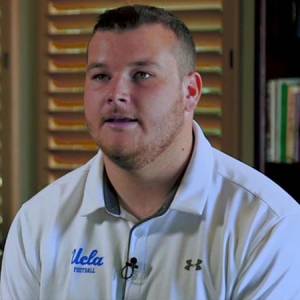 Scott Quessenberry is an American professional football player who plays in the National Football league (NFL) for the Los Angeles Chargers as their Guard. He was picked in the 5th round of the 2018 draft by the Chargers.

The former college football player at UCLA, Quessenberry currently earns around $764,252 as his yearly salary from the Chargers and has an estimated net worth of about $1 million. He is currently dating his longtime girlfriend Nicholette Christensen.

Scott Quessenberry's Net Worth and Salary

As of 2019, Scott Walker Quessenberry has an estimated net worth of over $1 million with the annual salary reported to be about $764,252.

Scott Quessenberry is currently in a relationship with his longtime girlfriend Nicholette Christensen. The couple has been dating each other for more than six years and celebrated their 6-year anniversary in September 2018.

Scott and Nicholette have not yet planned their wedding but might be getting married soon as they have been together for a long time and Nicholette also finished her graduation some months back.

Quessenberry often posts photos of his girlfriend on his Insta and dedicate beautiful lines to her.

Despite his popularity in playing career, he is also a famous social media celebrity since he has a huge number of fan followers on his social accounts. Quessenberry is not only a world-class athlete but also has a very attractive individual.

The Famous NFL star Scott is 6 feet 4 inch in height and weighs around 141 kilograms along with a charming personality.

Scott Walker Quessenberry was born on March 23, 1995, in Carlsbad, California but the details about his parents and family life isn't yet disclosed. As per his nationality, he is American and belongs to the o White ethnic group and his star sign is Aries. He grew up along with his brother David Quessenberry who also plays in the NFL.

Scott started his professional NFL playing career after being drafted in the 2018 NFL Draft by the Los Angeles Chargers where he was picked in the fifth round in 155th overall pick. Currently, he is playing alongside famous wide receiver Keenan Allen and also with the cornerback of Chargers Jason Verrett.