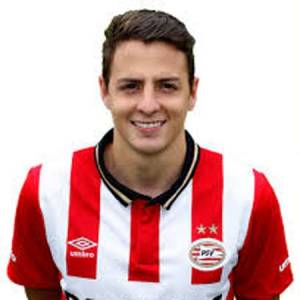 Santiago Arias is a professional footballer form Colombia who currently plays as a right-back for National Team of Colombia and PSV Eindhoven, the sports club from Eindhoven, Netherlands.

SEG is the agent of Santiago Arias.

Santiago Arias was born as Santiago Arias Naranjo on January 13, 19912 in Medellin, Colombia. Reviewing his nationality, Arias is Colombian and belongs to Latin ethnicity.

Arias was born to his father, Raul Arias, and mother, Monica Naranjo and grew up with his sister, Tatiana Arias.

As of 2018, his net worth is estimated at $8 million. He is one of the richest football players in Colombia only behind some players like Radamel Falcao, James Rodriguez, Carlos Bacca etc.

Santiago Arias began his career as a member of the La Equidad. In 2009, he was promoted to a senior team of La Equidad. Later, he left the club in 2011 after making 28 appearances.

Arias played 14 games for the Colombia U-20 scoring 1 goal. He represented his team in the 2011 South American Youth Championship. Along with the U-20 team, he won 2011 Toulon Tournament.

He was a member of Colombian’s 23 man squad for the 2014 FIFA World Cup and played three games as a substitute. He has been capped 38 games for Colombia national team.

Santiago Arias was the member of the Colombia national team that helped to reach the third position in 2016 Copa America along with Jeison Murillo, Stefan Medina, and  Edwin Cardona.

Currently 26, Santiago Arias is a married man. He  got married to his beloved wife, Karin Jimenez in July 2013. The couple welcomed their first child son, Thiago Arias in November 2017.

They opened a new Instagram account in their child name. Moreover, he often shares several pictures of his vacation with his wife. This is what concludes that Arias is living a lavish life full of luxury and comfort. In 2014, they settled in the Netherlands.