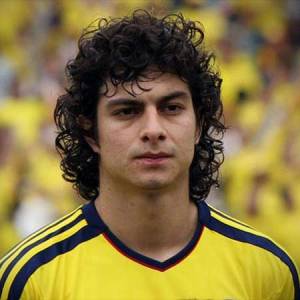 An international footballer, Stefan Medina currently plays as a defender for National Team of Colombia and Pachuca on a loan from Mexican football club, Monterrey.

Stefan Medina was born as John Stefan Medina Ramírez on June 14, 1992, in Envigado, Colombia. Regarding his nationality, he is Colombian.

Medina was born to his father, Beatriz Ramirez, and mother, Jhon Kennedy Median and grew up with his sister, Katherine Medina.

Stefan Medina began his career as a member of the Atletico Nacional where he became a first-choice player of the youth squad for before making a senior debut.

Promoted to the main squad during 2010 season, Medina made his senior debut in 2011. He was given the number 2 Jersey in memory of late Andres Escobar.

Later, Medina left the club in 2014 after making 88 appearances and scoring 3 goals. On July 1, 2014, joined to Monterrey with the transfer fee of £2.86million and made his debut against Leones Negros.

Medina became the starter for the squad throughout the entire 2014-015 season. For the club, he played 72 games so far. He was the member fo the team that won 2017 Copa MX.

Medina was loaned to Pachuca on January 1, 2016, in exchange for Miguel Angel Herrera where he scored 4 goals in 49 appearances before the end of his loan-season.

In 2009, Medina made his international debut with the Colombian U-17 with whom he played 2 games. He led the team to the fourth position in the FIFA U-17 World Cup in Nigeria.

On September 11, 2013, Medina earned his first senior cap in a world cup qualification against Uruguay.

Medina was then regularly invited on the squad after his second game, but he missed the 2014 World Cup, suffering an ankle injury. He has been capped 10 games with his national team.

Medina led the team that held the 3rd position in 2016 Copa América. He is supported by Farid Díaz, William Tesillo, and Pablo Armero during the national games.

Stefan Medina, who is 5 feet 10 inches tall in height with 71 Kg weight, is currently enjoying his singledom. Till now, he has not disclosed any information related to his relationship.

As of now, there is no any official information about his marital status or dating issues.