Jeison Murillo is a Colombian footballer who currently plays as center-back for National Team of Colombia and the Spanish football club, Barcelona on a loan from Valencia. The 25-year-old footballer played for Udinese, Granada B, Granada, Cádiz, and Las Palmas and Inter Milan previously. In 2015, he won Copa American; Best Young PLater/ Team of the Tournament.

Jeison Murillo is married to Samanta Gutierrez since 2016. He currently earns about $4 million as annual salary and has an estimated net worth of about $5 million in 2018.

Jeison Murillo was born on May 27, 1992, as Jeison Fabián Murillo Cerón in Cali, California. He was born to his father, Jamer Murillo, and mother, Liliana Ceron and grew up with his sibling, Junior Murillo. Regarding his nationality, Murillo is Colombian.

Jeison Murillo Salary and Net Worth

In 2016, Murillo's market value was estimated at £16.20million and currently, his market value is estimated to be around £13.50milllion. He recently joined the Spanish giants FC Barcelona on loan until the end of the season with the option to sign permanently for €25 million.

Murillo received around $3.40 million as an annual salary from Valencia, however, he is expected to be making a maximum wage in Barcelona which is reported to be about $4 million. He was paid €1.3 million as yearly salary by Inter in his first season but was later doubled to €2.5 million in his second season.

Summing up his total earnings, endorsements, and properties, Murillo's net worth can be assumed to be about $5 million. With his adequate wealth, Murillo is enjoying a great and lavish life.

Jeison Murillo began his career as a member of the Deportivo Cali U-19. In 2009, he was promoted to a senior team.

Murillo moved to the Italian football club, Udinese Calcio in 2010 and was immediately sent on loan to Granda B. During his loan-season, he scored 2 goals in 22 appearances.

He was then permanently signed by Granada in 2011. For the club, he scored 1 goal in 51 appearances. On August 1, 2011, he was loaned to Cadiz where he scored 3 goals in 27 appearances before ending his loan-contract.

Murillo moved to Internazionale with the transfer fee of £7.20million on July 1, 2015, on a five-year contract. He has so far scored 2 goals in 61 appearances.

On August 18, 2017, He was sent on loan to Valencia CF which would keep him until June 30, 2019. However, he was again loaned to Barcelona on December 20, 2018. Barcelona signed Murillo to fill the void created by the injuries of their center-backs Samuel Umtiti and Thomas Vermaelen.

In 2009, Jeison Murillo made his international debut with the Colombia U-17 with whom he played 6 games scoring 1 goal. He also played four games for Colombia U-20.

On October 10, 2014, Murillo earned his first senior cap with the Colombian national team in a friendly match in a 3-0 win against El Salvador.

He was described as best young player of 2015 Copa America tournament and held the 3rd position. He has been capped 25 times for his national team scoring 1 goal.

Jeison Murillo got married to his wife, Samanta Gutierrez with whom he has a daughter. The couple exchanged their vows in 2016, in a romantic ceremony in Cali attended by players such as Fredy Guarín, Santos Borré, and Andrés Felipe Roa. 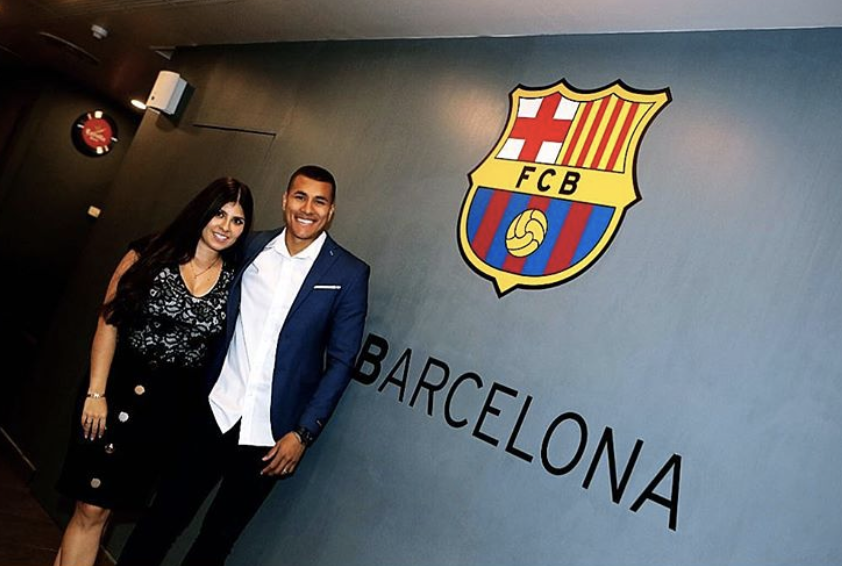 The couple first met in 2011 through a mutual friend.

Guitierrez completed her primary education from the Santa Dorotea school and graduated with a degree in Petroleum Engineering from the National University of Medellin.

Currently, Guitierrez is studying for a Master's degree in Business Administration at the Milan Polytechnic MIP.

He stands at height of 6 feet tall and weighs about 728kg.