Santana Garrett is a well-known American professional wrestler. The multi-talented wrestler is also a valet and a model. She has been numerous titles national and international, such as the Shine Championship, the Shine Tag Team Championship, and the Wonder of Stardom Championship. in her career.

Santana Garrett was born on May 22, 1988, in Orlando, Florida. She is among the eight children born to Kenny Garrett and his wife. Her father is a retired wrestler under the name"TNT" Kenny G. She has seven siblings, including five brothers and two sisters. Garrett stands five feet and five inches tall and weighs 54 kg.

In 2013, Santana made her debut at the WWE. She started training with the Enhancement talent. Garrett lost to Charlotte at the WWE development territory NXT. Garrett moved to numerous organizations and eventually signed with WWE. She also performed in Impact Wrestling under the ring name Brittany.

In 2019, Santana officially signed a contract and would report to the Performance Center before she appeared in the developmental company NXT. The following year, The wrestler was the number one contender in the battle royal and was set to face Rhea Ripley but was eliminated by Shayna Baszler. In June 2021, Santana moved away from WWE after they did not extend her contract.

Yes, You read that right. Santa is married to her longtime boyfriend. The duo exchanged their wedding vows in March 2019. They had been seeing each other for a long time before their wedding. Garrett opened about her marriage through a post on her social media account. 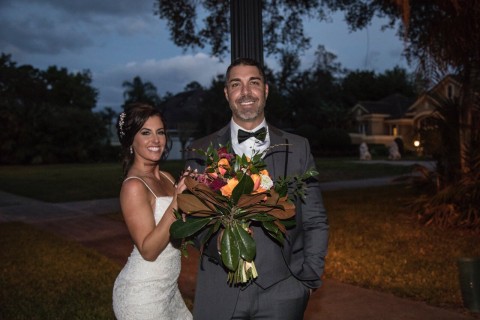 Santana Garrett and her husband at their wedding SOURCE: [email protected] Garrett

Santana has not shared a word about her husband to the public. However, Shei is an active social media user and keeps sharing many of her photos in her timeline but not a word about her life partner. The duo has not shared about expecting a baby. Garrett has not rejoined in any wrestling organization and could be expecting their first child shortly.

How Rich is Santana Garrett? Know About Her Net Worth

Santana Garrett has an estimated net worth of more than $1 Million. Garrett has been working as a professional wrestler and a model for more than a decade. The average salary of a professional female wrestler in the United States is more than $60,000. As a top-ranked wrestler, She must be earned much more than the average salary. Garrett currently lives in Orlando, Florida, along with her husband. She owns two dogs. Io Shirai is another famous NXT female wrestler with a net worth of more than $4 Million.