Gossip Ryan Fitzpatrick and Wife Liza Barber Spending Quality Times with Children; The Couple is Together Since 2006

Ryan Fitzpatrick and Wife Liza Barber Spending Quality Times with Children; The Couple is Together Since 2006

Ryan Fitzpatrick, an American professional football quarterback, currently plays for the Tampa Bay Buccaneers in NFL alongside DeSean Jackson and Brent Grimes. With his playing career, Ryan is estimated to be enjoying the net worth of $24 million, and like his successful professional career, Ryan Fitzpatrick's married life is also in the highlights.

Well, the 35-year-old footballer is married to his college girlfriend, now his wife, Liza Barber. The couple is together since 2006 and shares 6 children. Curious to know about the couple's married life and relationships? Scroll down slowly for the details.

Lucky Ryan, being blessed with lucrative contract and salary, is also lucky to have a wife like Liza Barber, who loves him to death.

And talking about the couple's relationship beginning, the love story is reported to have ignited from the college days while both were the attendants at Havard, from where they graduated in 2005. However, the couple has kept their lips sealed regarding their initial dating details.

Well, sources report that Liza Barber, former standout soccer player for the Crimson, was the captain of the college team and that sports interest probably led them to datings later. 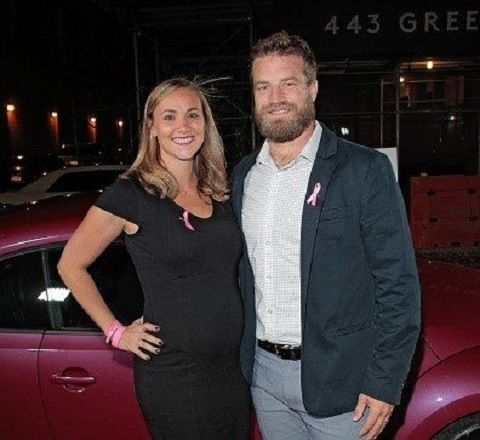 Ryan and Liza, soon after the graduation reportedly started to live together and even more, they had a joint bank account. And the year, 2006 proved to be the life-changing year for the couple as Ryan proposed Liza with a large ring, making them engaged.

But wait! The story of engagement is not over yet.

Ryan Fitzpatrick's Engagement was not ordinary

Ryan and Liza got engaged in November 2006, after Ryan proposed her with a ring while on their outing.  But the idea of buying a ring got so awkward for Ryan as he had purchased the ring from their joint bank account, which made him harrassed more after the card got denied while Liza made few purchases at an area Gap store.

"So I was like, ‘Oh, man.’ I had to figure out from the Gap to my house how I was going to propose to her. Luckily, the ring was in the car. We drove by all these fancy places. I asked her if she wanted to grab some dinner and sit by the lake. It was November, and she was like ‘Why would I do that? It’s freezing outside!’ All she wanted was McDonald’s. She ordered probably a 10-piece Chicken McNuggets and had sweet-and-sour sauce on her face."

However, he popped the question thinking it was the perfect setting, and that was, a happy moment for both.

Also Read: Ryan Fitzpatrick Net worth 2018; Details about his Contracts and Salary

The lovely couple, Ryan and Liza got married in 2006, the same year of their engagement. However, the couple has not disclosed their marriage details. Probably, they tied the knot in a private ceremony in front of their close friends and relatives.

But most importantly, the couple is still going strong in their relationship without any mishaps of separation or divorce. Though the couple is not active much on social media, their lovely moments get the attention of all.

Ryan Fitzpatrick of the @NYJets cooks up delicious chicken squares with his wife, Lisa. https://t.co/CVJaOsd6HK pic.twitter.com/SCAprA6qPS

And one thing is so much excitement about these lovely duos: Ryan and Liza. Well, it has been more than 11 years since their marriage, but the couple has not taken off their engagement and wedding ring till date.

Many quarterbacks take off their wedding ring or other ornaments to avoid injury, but Ryan seems a contradiction to it as he plays with the ring. Have a look at the Tweet.

#MorningMen is on! @RyanFitzpatrick played last night while wearing his wedding ring! When do you take off your wedding ring? #SXMsports

When Ryan was asked about why did not he take the ring off, he told The New York Times:

"I haven’t seen a reason to take it off, I guess. It stands for something. It’s not like I’m trying to throw a message in anybody’s face. It’s just a personal thing between my wife and me. It’s important for me not to take it off."

Both lovers are free from the record of past affairs, and the couple's love has grown much stronger with the welcome of their children.

Ryan Fitzpatrick, who recorded the score of 50 in Wonderlic Test just in 9 minutes, besides being a successful footballer, is also a lovely father. Ryan and Liza have quite expanded their family to 8, including their 6 children.

The couple is the parents of 4 daughters:  Ruby, Maizy, Lucy, and Zoey and 2 sons: Tate, and Brady.

Well, regarding the date of birth of their children, the couple has kept it undercover. Though, it is reported that Liza gave birth to her third child, daughter Lucy in February 2009. 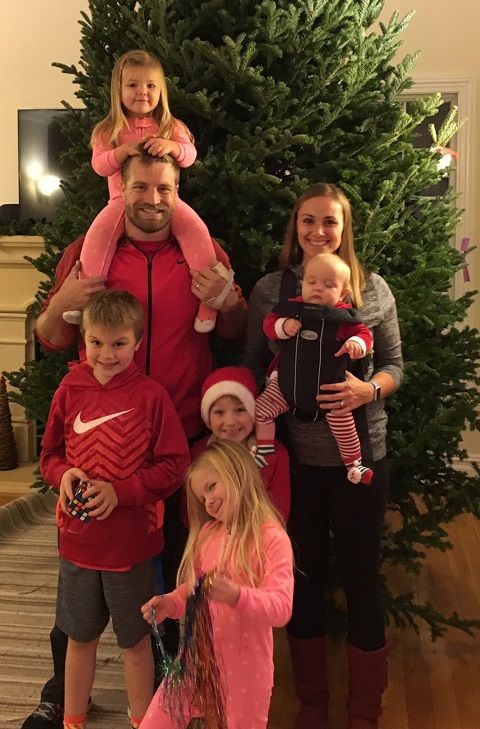 In 2014, Ryan's son Brady got into the limelight after he showed off some serious math skills while he was in his dad Ryan’s postgame press conference. Check out this video.

Reportedly, the happy family is spending a lot of quality times, though, they make the seldom public appearances. We wish them best wishes for further.