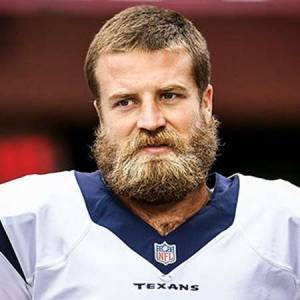 Ryan Fitzpatrick is married to his wife Liza Barber and has 5 children with her. He has an estimated net worth of $24 million.

Ryan Fitzpatrick was born by his full name Ryan Joseph Fitzpatrick on November 24, 1982, in Gilbert, Arizona. He holds an American nationality and his ethnicity is white. His star sign is Sagittarius.

There is not much known about Ryan Fitzpatrick parents.

Fitzpatrick attended Gilbert (AZ) Highland High School. He also played football during his high school years. He was the first quarterback in the school who rushed over 1000 yards in a career.

Ryan Fitzpatrick started his NFL career with St. Louis Rams. He played his first NFL game on November 27, 2005. He played against the Houston Texas.

Later on, he also played with Tennessee Titans and Houston Texans. On March 11, 2015, the New York Jets acquired Ryan Fitzpatrick. On July 27, 2016, he agreed to a one year worth $12 million contract with the Jets. He left Jets in 2017 and signed a 1-year contract with Tampa Bay Buccaneers where he currently plays.

Ryan Fitzpatrick is a married man. He married his sweetheart girlfriend Liza Barber in 2006. Ryan and Liza met each other at Harvard. His wife Liza was a soccer star at Harvard. She was the captain of her team during her senior years. The couple is the parents of 4 daughters: Ruby, Maizy, Lucy, and Zoey and 2 sons: Tate, and Brady. Ryan Fitzpatrick is busy in his professional career but he equally gives importance to his family. He is a loyal husband and a caring father too.

Ryan Fitzpatrick who recorded the score of 50 in Wonderlic Test just in 9 minutes, besides being a successful footballer is also a lovely father. Ryan and Liza have quite expanded their family to 8 including their 6 children.

Ryan and Liza haven't officially outed the date of birth of their children and have kept it undercover. Though, it is reported that Liza gave birth to her third child, daughter Lucy in February 2009.

Ryan's son Brady and Ryan are pretty competitive to each other in Maths and Rubix cube solving, let's take a look at a clip where they solve R-cube together.

Currently, the lovely couple is extremely happy in their relationship. There is no news spread about their divorce. Ryan is successful on the field, as well as in his married life, it seems their married life is one of the rarest examples of perfect marriage.

Salary and Net worth of Ryan Fitzpatrick

Ryan Fitzpatrick is one of the valuable assets of the football world. He has set an example for upcoming players and they can walk into his footsteps to get success. He is the perfect example of what a sportsman should be like.

He is earning a handsome salary which is reported to be about $3.3 million. His estimated net worth is around $24 million. He also owns a house in Gilbert, Arizona.