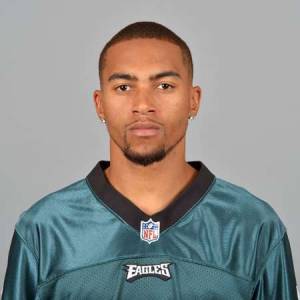 DeSean William Jackson better known as DeSean Jackson is an American professional footballer who plays for the Philadelphia Eagles of the NFL. The jersey No. 10 wide receiver played college football for the University of California, Berkeley. Further, he was drafted by the Philadelphia Eagles in the 2008 NFL Draft. Also, he played two seasons (2014-16) for the Washington Redskins and Tampa Bay Buccaneers (2017-18).

He is dating Kayla Phillips. The two have played perfect parental roles for their three children. However, they just have one biological child together, the other two are from their previous relationships.

Jackson is yet to be married. Kayla Phillips is the hot WAGs of wide receiver for the Tampa Bay Buccaneers, DeSean Jackson. The pair first met in 2015 and started going out that same year. Their relationship ever since is going pretty well without any rumors regarding their split or affairs.

Ain’t nothing worth more than this bond Daddy boys !! Jace & BabyJac

What's more, Kayla has another son, Tru from her previous relationship Omyn Newkirk.

DeSean Jackson was born on December 1, 1986, in Los Angeles, California, the United States. His star sign is. Talking about his nationality, he is an American and belongs to mixed ethnicity.

Jackson enrolled at Long Beach Polytechnic High School, he was one of the top wide receiver recruits in the nation. He was also named the 2004 Glenn Davis Award winner by the Los Angeles Times as Southern California’s player of the year.

Upon graduation, he attended the University of California. There he played for the California Golden Bears Football Team.

In 2008 NFL Draft, Janson was picked by the Philadelphia Eagles with the 49th pick overall in the 2nd round. On July 20, 2008, he inked a four-year contract with the team. Due to injuries sustained by Reggie Brown and Kevin Curtis, he was the first player to start opening day for head coach Andy Reid.

On April 2, 2014, Jackson joined the Washington Redskins, agreeing on a reported three-year, $24 million contracts with $16 million guaranteed. Further, he was voted the 63rd best player (overall) in the league on the NFL Network's Top 100 Players of 2014, by his peers.

On March 9, 2017, Jackson signed a three-year, $33.5 million contract with the Tampa Bay Buccaneers.